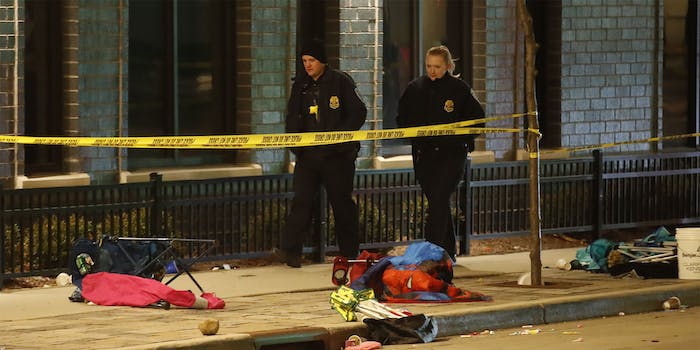 People are using the terrible tragedy as an excuse to sow division.

On Sunday, a holiday parade in Waukesha, Wisconsin ended in tragedy when an SUV drove into paradegoers. At least five were killed and more than 40 wounded.

Last night, local police said that a “person of interest” is in custody. Citing the ongoing investigation and need to notify victims’ next of kin, authorities have released relatively little additional information. As of this writing, police have yet to confirm the individual’s name, potential motives, and other details.

That hasn’t stopped right-wing media and figures. The internet is awash with rumors about the suspect’s motives, beliefs, and background. Many of the rumors center on the race of the man they believe responsible—he is Black—and his social media history, which includes posts about racism and police violence against Black people.

According to Nancy Chen of CBS News, on Monday morning, officers identified the man as Darrell Brooks. According to the Milwaukee Journal-Sentinel, Brooks had just been released from jail on Friday. He had previously been charged after running over a woman at a gas station with his car.

Based on Brooks’ social media history and alleged criminal record, right-wing figures are advancing various theories about his motives and beliefs. Some of their allegations twist the facts or seem to rely on unverified rumors.

The Post Millennial’s Andy Ngo tweeted that Brooks “posted a quote in 2016 on a now-deactivated Facebook account: ‘Run them over. Keep traffic flowing & don’t slow down for any of these idiots…’ #BLM.”

The implication of Ngo’s tweet is plain: Brooks advocated running over pedestrians in support of the Black Lives Matter movement. A review of the post to which Ngo refers casts doubt on this narrative, however.

Per a screenshot attached to Ngo’s tweet, Brooks reposted a Facebook post by a police officer who resigned after reports emerged that he’d written, “Run them over,” along with advice on getting away with it in response to a planned Black Lives Matter protest in 2016.

It seems more likely that he was criticizing the officer for suggesting running over protesters than advocating doing the same.

Other conservative figures opined falsely that larger media outlets wouldn’t cover the tragedy, presumably due to Brooks’ race and social media posts, some of which include conspiracy theories.

“This guarantees this will vanish from CNN and MSNBC within a day (or less),” tweeted Joe Nicosia, a former editor of the right-wing Washington Examiner.

Islamophobic provocateur Laura Loomer went further than most in her characterization of the deadly attack.

Loomer wrote on Telegram, “The three suspects in the car ramming in Wisconsin are black. My guess is they are probably BLACK MUSLIMS because this was a direct attack on Christians and there’s only one ideology that is demented enough to attack people at a CHRISTMAS PARADE!”

Little, if any, of this appears to be true. There’s no evidence that Brooks is Muslim; in fact, an archive of what’s believed to be his since-deleted Facebook page includes posts praising Jesus and Christianity.

It’s unclear why Loomer believes there were three people in the vehicle. There have been unverified reports that a second person was in the car. Their race and gender is unknown, nor is it known whether they are suspected of a crime.

Another prominent rumor is that Brooks was motivated by Kyle Rittenhouse’s acquittal. On Friday, a Wisconsin jury found Rittenhouse not guilty of killing two and wounding another during protests over the police shooting of a Black man last year.

“I’m guessing that it was in retaliation for the Rittenhouse verdict,” wrote one Twitter user.

Some of these theories have been purportedly refuted by police. CNN reports that several sources familiar with the investigation said that there’s no indication it was related to either terrorism or the Rittenhouse case. According to CNN, police have also said there are indications the suspect was fleeing another incident.

Nevertheless, such rumors are running rampant across right-wing social media.

The tragedy that claimed five lives and injured dozens has become an excuse to sow division along racial, religious, and political lines.

The Waukesha Police Department is holding a press conference at 1pm CT. On Facebook, the department posted a link to a fundraiser to benefit the victims.