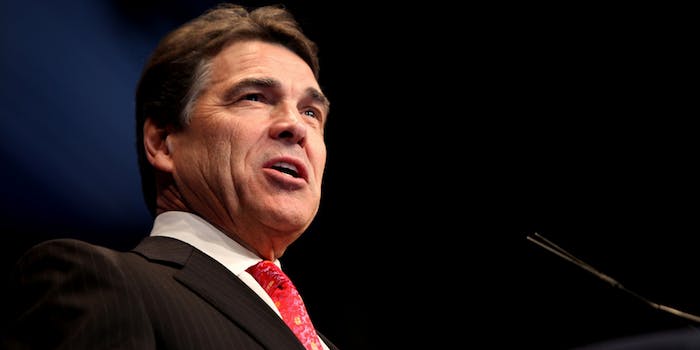 Unsurprisingly, this isn't going over well.

Texas Gov. Rick Perry, no stranger to Internet scorn and mockery, has drawn the ire of online politicos once again, with controversial new comments comparing homosexuality to alcoholism.

While speaking on economic issues at the Commonwealth Club of California in San Francisco, the former Republican presidential candidate was asked about his state party’s inclusion of recent platform language that favors gay conversion therapy.

In defending the Texas Republican party’s position, Perry said, “Whether or not you feel compelled to follow a particular lifestyle or not, you have the ability to decide not to do that,” according to the San Francisco Chronicle.

He added: “I may have the genetic coding that I’m inclined to be an alcoholic, but I have the desire not to do that, and I look at the homosexual issue the same way.”

Perry and fellow Lone Star State Republicans have already faced scrutiny for adopting a platform at their annual convention this month which endorses the voluntary use of reparative therapy—a widely discredited practice in which counselors try to turn gays and lesbians straight. Though Texas Republicans favor its use, other states have started to ban such practices.

Assaholics Anonymous? “Rick Perry Says a Homosexual Deciding Not 2 Be Gay is Like an Alcoholic Deciding Not to Drink https://t.co/taBZGi3Qhk”

Anyone else hoping Rick Perry gets drunk and becomes gay?

Many feel the comments only further diminish Perry’s chances in a future presidential bid.

Still others used the comments to slam Perry’s other positions.

Rick Perry: “Homosexuality is like alcoholism, which can be treated, but I still won’t expand Medicaid so people can afford treatment.”

This is not the first time Perry has been roundly criticized by the Internet. During his 2012 presidential campaign, he was relentlessly made fun of for announcing that he wanted to shut down three federal government agencies and then being unable to name them. Some of his political ads were also mocked during that campaign.