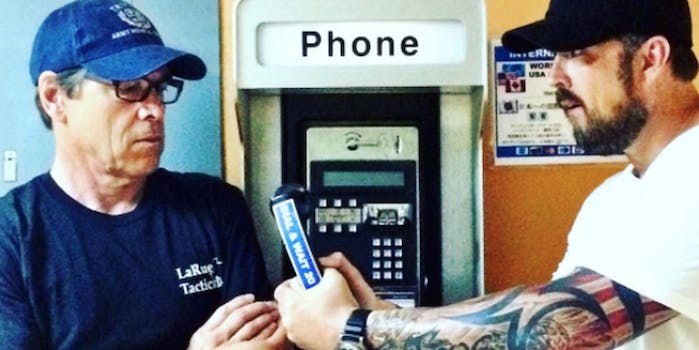 Could Rick Perry be heading for Donald Trump’s White House?

Despite clashing on the campaign trail, Trump and Perry have similar viewpoints.

The Dancing With the Stars flunkie posted this photo on his Instagram and Twitter timelines today, less than 24 hours after Donald Trump was declared the victor over Democratic nominee Hillary Clinton.

Just got a call to #makeamericagreatagain Saddle up & ride, bro!! #godblessamerica

Immediately, news organizations and watchful Twitter and Instagram followers latched onto this tidbit, concerned or exuberant that it could suggest he’s being tapped for a position on president-elect Donald Trump’s cabinet.

I can't wait for you to drive some bulls up to the Washington DC to break a few pieces of liberal china.

.@GovernorPerry You are the only person in the GOP more of a threat to the USA I know than @realDonaldTrump. Could you just not…

It wouldn’t be a completely unexpected turn of events: Perry’s policies and viewpoints about women, relationship with the LGBTQ community, debate performances, and history of courtroom controversy are not dissimilar to Trump’s, after all.

It’s just surprising when you remember that Perry called Trump “unfit to be Commander-in-Chief” and literally challenged Trump to a pull-up contest during the primary season 16 months ago.

Maybe if he is tapped to helm a high-profile government agency, he’ll actually be able to remember its name.