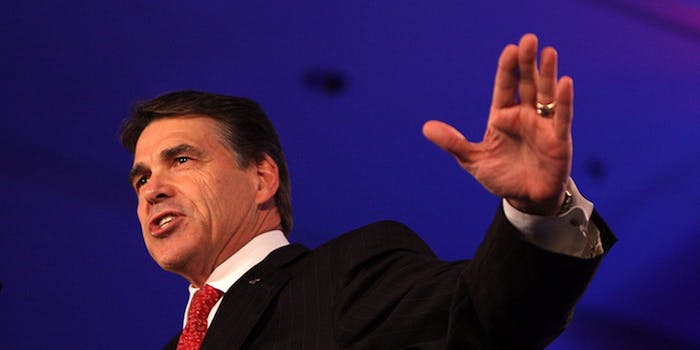 The Texas governor and GOP candidate is heading into rarefied territory with a widely loathed campaign ad.

It’s Friday, Friday, and baby, Rick Perry is looking forward to the weekend.

Anything would be better than this week for the Texas governor, who saw his campaign ad “Strong” become one of the most disliked videos on YouTube.

As of Thursday night, “Strong,” in which Perry calls for a renewed ban on gays serving in the military and religion in public schools, drew more than 336,000 dislikes, surpassing the current count on Rebecca Black’s “Friday” music video.

It’s not an all-time record yet.  The original version of Black’s original video drew more than one million dislikes before being taken down. And neither Perry or Black are anywhere close to the most hated YouTube video, Justin Bieber’s “Baby,” which has been disliked more than two million times. (What does it mean that the hatred of a Canadian teenager’s music video is one of the few things that can still unite this divided nation?)

Of course Perry’s campaign ad has only been up since Tuesday. Bieber’s music video has been up since February 2010, so there’s still time for the Texas governor to catch up. Just wait until next Friday.

Comments and ratings on “Strong”  have been turned off, but people were still making parodies of the video and taking to Perry’s Facebook page to let the candidate know how disappointed they were in the video.

“You scare me on so many levels, I didn’t even know prejudice people like you still existed. WOW You will NEVER be President,” wrote Molly Grace-Cross.

“You are a horrible person, I guess all the gay soldiers who have given their lives for this country are not worth your time, and also kids can open pray or celebrate christmas in schools, they just can’t force others to do the same, please fire your speech writers and hire someone who can do their research without making you look like a tool,” wrote Steven Collins on Perry’s Facebook wall Thursday evening.

Interestingly, even some people in Perry’s campaign were against producing the ad, according to a story published by the Huffington Post on Thursday. The Perry campaign’s Tony Fabrizio reportedly called the ad “nuts.”

Okay, but what we really want to know was whether he clicked “dislike.”