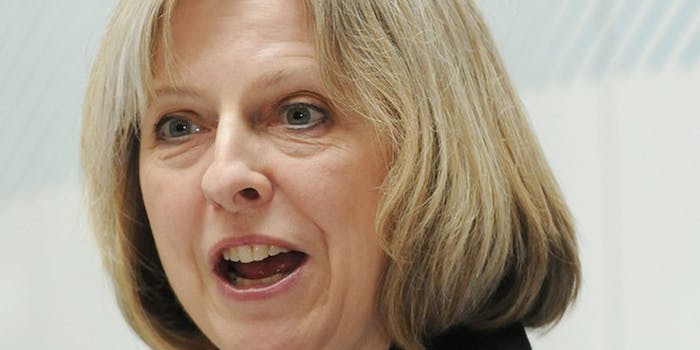 Only 9 percent of Brits support the decision that could see Richard O'Dwyer, 24, facing a decade in U.S. jails.

British Home Secretary Theresa May, whose approval is necessary to extradite citizens, knows of the overwhelming opposition to her decision to send 24-year-old Englishman Richard O’Dwyer to be tried in the United States.

But she proved on Monday she doesn’t care.

O’Dwyer’s been charged with copyright infringement, having owned and operated the website TV Shack from late 2007 until 2010. TV Shack didn’t actually host any copyrighted material, though it did enable users to easily search for pirated streams of television shows. He’s expected to face both stronger charges in the U.S. than he would in the U.K., and much harsher penalties if convicted.

May signed O’Dwyer’s extradition order two months ago. Since then, support for O’Dwyer has exploded. A recent poll found that only 9% of Brits support the extradition order, and 46 percent of them think he shouldn’t be prosecuted at all.

In addition, a Change.org petition started by Wikipedia founder Jimmy Wales in late June quickly became the fastest-growing in the site’s history, spokesman John Coventry told the Daily Dot. It currently has over 250,000 signatures.

Instead, May only spoke to the House of Commons, and only reaffirmed her stance. “I have decided to uphold the extradition,” she announced Monday.

O’Dwyer will go before an appeals court at an undetermined date later this year.

“I am still seeking a meeting with Theresa May,” Wales tweeted after the announcement.

O’Dwyer’s mother, Julia, who maintains a vigilant presence online in support of her son, wasn’t as calm.

“The way ‪#TheresaMay‬ cruelly & callously dismissed ‪#RichardO‬ in parliament today I will never forget,” she tweeted.

“this ‪#extradition‬ is despicable this is not even a crime in the uk but we get so little chance to prove it,” she added.

She also noted that British judges recently refused to extradite a suspected pedophile to the United States on the grounds that he could face particularly harsh punishment if convicted.