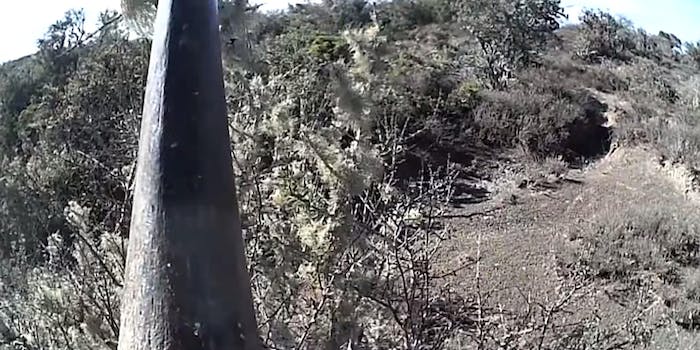 Rhinoceros have roamed the earth for 60 million years, but by the end of the next decade, the entire population of these ancient animals could be wiped from the earth, literally hunted to death by poachers.

A team of British conservationists would like to prevent that outcome from occurring, so they’re equipping rhinos in South Africa with the animal kingdom equivalent of an anti-theft alarm system—complete with a camera embedded in the animal’s horn.

Led by Dr. Paul O’Donahue, a 15-year veteran of rhino conservation, the tech-laden approach to animal protection starts with some unconventional methods.

First, they have to sedate a rhino, knocking it unconscious. Then they take an electric drill to the horn of the creature—a procedure the doctor ensures is painless for the rhino. Placed in the newly created hole in the horn is a camera that provides the closest anyone will have to a view of the world through the eyes of a rhino.

“We’re going to fit rhinos with monitors, bio-loggers—things like heart rate sensors, pressure sensors—that will detect the precise moment the rhino is killed,” he told the BBC. “It’s basically a burglar alarm for rhinos.”

The system O’Donahue and his team have built utilizes existing security technology, repurposed for its living subjects. Phone and satellite communication will be used to connect rangers and those on watch for potential poachers to the animals directly affected by the threat. If one goes down, response can be nearly immediate.

If the rhinoceros’ heart rate sensor stops, an alarm is triggered and the camera turns on. The anti-poaching units can act quickly and be on site in ten minutes.

“Poachers currently, they don’t kill one rhino and leave. Ten, 12, 15 rhinos killed in one or two nights. It’s poaching outbreaks, and we can stop this,” O’Donahue said. “It’s the outbreaks of poaching that are decimating rhinos around the world.”

Poaching in South Africa has become especially damaging to the rhino population in recent years, with incidents of killing skyrocketing while arrests have been too few and far between. According to South Africa’s Department of Environmental Affairs, 1,215 rhinos were poached in 2014, a record high that continued the rising trend from the years prior.

The illegal hunting is driven by demand for the animal’s horn, which is used in a variety of ways, none of which justify the death of an animal. Efforts to quell this demand by replicating the horn through 3D printing, along with other efforts to curb poaching may have impact in stopping the practice, but may also be efforts that are too little, too late; two species of rhinos are considered critically endangered, others have gone extinct or been pushed to the brink of extinction in recent years.

O’Donahue’s rhino cam and alarm protection may finally give those who are tasked with guarding rhinos an advantage in pursuing the criminals who harm them. Ideally, it will lead to a future in which more rhinos will be able to roam without need to install an alarm system in their horns.