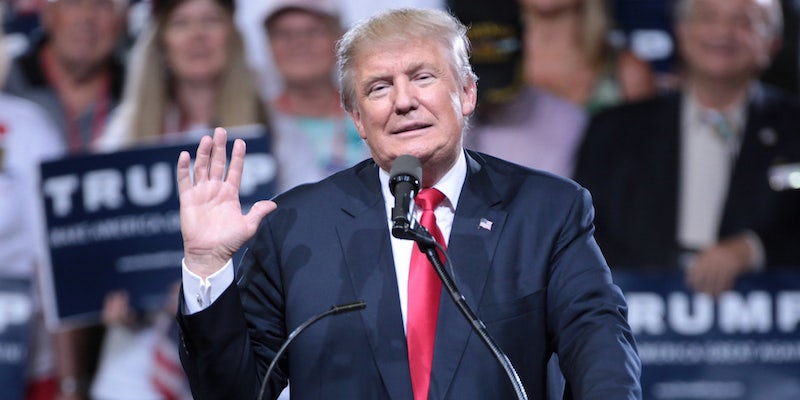 Will Trump drop out? Some Republicans say he should.

Donald Trump may want to start thinking about a plan B.

The Washington Post on Friday published leaked audio recorded in a bus outside the set of Access Hollywood in 2005 in which Trump described his pursuit of a married woman and boasted his ability to do “anything” he wants with women because he’s “a star.”

“You know I’m automatically attracted to beautiful—I just start kissing them. It’s like a magnet. Just kiss. I don’t even wait,” Trump said to Access Hollywood host Billy Bush. “And when you’re a start they let you do it. You can do anything.”

“Grab them by the pussy,” Trump continued. “You can do anything.”

Condemnation of Trump, the Republican presidential nominee, came swift and strong. First from Democrats, including his opponent Hillary Clinton, then from members of his own party. Here is a running list of the Republican lawmakers and other leaders who have distanced themselves from Trump.

“No woman should ever be described in these terms or talked about in this manner. Ever.” (via Politico)

“I am sickened by what I heard today. Women are to be championed and revered, not objectified. I hope Mr. Trump treats this situation with the seriousness it deserves and works to demonstrate to the country that he has greater respect for women than this clip suggests. In the meantime, he is no longer attending tomorrow’s event in Wisconsin.” (via Paul Ryan)

These comments are disturbing and inappropriate, there is simply no excuse for them.

Donald's comments were vulgar, egregious & impossible to justify.
No one should ever talk about any woman in those terms, even in private.

Make no mistake the comments were wrong and offensive. They are indefensible.

.@JohnKasich statement on Donald Trump: "I will not vote for a nominee who has behaved in a manner that reflects so poorly on our country." pic.twitter.com/heXuyVSWp1

As the grandfather of two precious girls, I find that no apology can excuse away Donald Trump's reprehensible comments degrading women.

Hitting on married women? Condoning assault? Such vile degradations demean our wives and daughters and corrupt America's face to the world.

“There are no excuses for Donald Trump’s offensive and demeaning comments. No woman should ever be victimized by this kind of inappropriate behavior. He alone bears the burden of his conduct and alone should suffer the consequences.” (via John McCain)

Statement regarding @realDonaldTrump and @HillaryClinton. pic.twitter.com/4KEXpw64ek

.@realDonaldTrump should drop out. @GOP should engage rules for emergency replacement.

“In a campaign cycle that has been nothing but a race to the bottom—at such a critical moment for our nation—and with so many who have tried to be respectful of a record primary vote, the time has come for [Trump running mate] Governor Pence to lead the ticket.” (via Salt Lake Tribune)

I condemn in the strongest possible terms the comments made by Donald Trump regarding women. I find them disgusting.

“This is disgusting, vile, and disqualifying. No woman should ever be subjected to this type of obscene behavior, and it is unbecoming of anybody seeking high office. In light of these comments, Donald Trump should step aside and allow our party to replace him with Mike Pence or another appropriate nominee from the Republican Party. I cannot in good conscience vote for Donald Trump and I would never vote for Hillary Clinton.” (via Washington Post)

The comments DJT made are lewd & insulting. There is no excuse, and no room for such reprehensible and objectifying talk about anyone, ever.

Donald Trump's vulgar comments are totally inappropriate and disgusting, and these words have no place in our society.

I have never been comfortable with Donald Trump as our Republican nominee.

Name one sports team, university, publicly-held company, etc. that would accept a person like this as their standard bearer?

I can no longer endorse Donald Trump. Read my full statement: pic.twitter.com/lfa9mYZbdC

I will not vote for Donald Trump. Read my statement here: pic.twitter.com/F8zajgDZpg

And now: Joe Heck, in NV Senate race, becomes latest R to withdraw his support of @realDonaldTrump – does so at event in Vegas.

Heck says only option for Trump is to ask Trump to step down. (Remember: Trump called print journos today to insist he won't.)

Enough is enough. Donald Trump should withdraw in favor of Governor Mike Pence. This election is too important.

Donald Trump should withdraw and Mike Pence should be our nominee effective immediately.

NEWS: @RepCharlieDent demands @Reince get Trump off the ticket – or else.

"If he can't, then he should step down," says DENT

I cannot and will not support Donald Trump for president. He has forfeited the right to be our party’s nominee.

The comments made by Mr. Trump were disgusting and totally unacceptable under any circumstance. (1/2)

It would be wise for him to step aside and allow Mike Pence to serve as our party's nominee. (2/2)

"I cannot support him as my party's nominee." — @GovSandoval pic.twitter.com/MMR1yvuxgE

If Donald Trump wishes to defeat Hillary Clinton, he should do the only thing that will allow us to do so – step aside. My full statement: pic.twitter.com/hadKP4gIrr

PORTMAN on Trump: "I can no longer support him." pic.twitter.com/sHg9MKYHsT

“It is time for the good of the nation and the Republican Party for Donald Trump to step aside and let Gov. Mike Pence assume the role as the party’s nominee. If he does not step aside, I will write in a Republican for the office of President.” (via the Tennessean)

We will continue to update this list as new denouncements arrive.