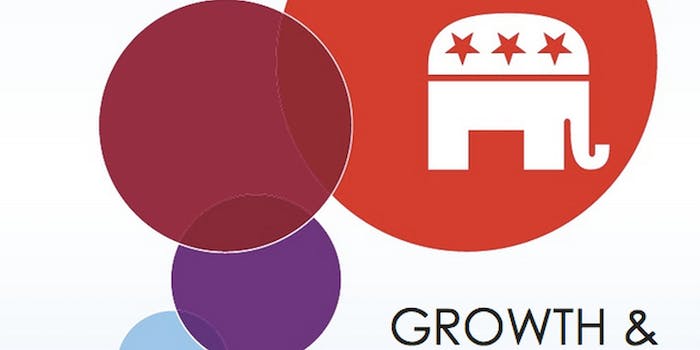 A new report suggests the creation of a chief technology officer post within the party.

On Monday, the Republican Party released its Growth and Opportunity Project report, the GOP’s November election “autopsy.” The effort was launched by party chairman Reince Priebus and the final report says Republicans desperately need to catch up to their Democratic counterparts when it comes to digital technology and social media.

The report offers a blunt look at the 2012 election and the state of the Republican party:

Public perception of the Party is at record lows. Young voters are increasingly rolling their eyes at what the Party represents, and many minorities wrongly think that Republicans do not like them or want them in the country. When someone rolls their eyes at us, they are not likely to open their ears to us.

The Growth and Opportunity Project report stresses that in order to attract voters, especially young ones, they’ll need to embrace social media. It specifically states: “We can’t use old communication tools for young voters. Technology is second nature to young voters. Using social media platforms such as Twitter, Facebook, Reddit, and Instagram is important, but we also need to be actively looking for and utilizing the newest and most cutting-edge social media platforms to engage this generation.”

Results for a survey conducted during the project revealed that 29 percent of respondents believed the Republicans needed to do a better job with social media. The report then goes on to recommend that the party hire a chief technology and digital officer by May 1, so that it can be ready by the 2014 and 2016 elections. It states that digital operatives need to be treated as an important part of any campaign, not just a forgotten third wheel. The party even plans on establishing a digital “training institute” to prep Republican operatives at all levels of government.

The creation of a digital post and technology training institute are all efforts by the party to catch up to the Democrats and President Barack Obama’s campaign. As one Republican said in the report, Obama used technology to run a national campaign as if it were local, engaging millions of people on different platforms. While the report also talks about policy and message changes that should be made, it’s obvious that the GOP believes that social media is an important vehicle for those changes.