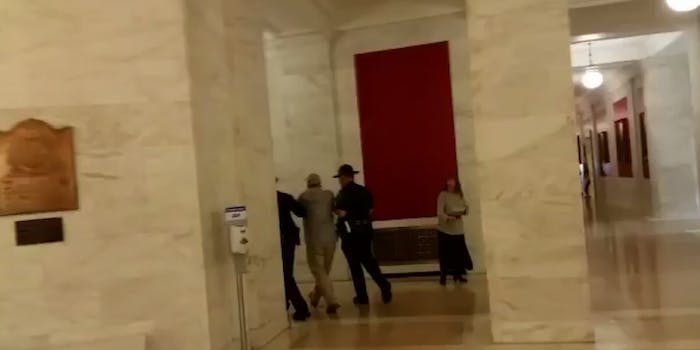 Public News Service said in a tweet that Heyman was 'performing journalism' and they are working to get him out of jail.

A journalist in West Virginia was arrested on Tuesday during an event featuring Kellyanne Conway and Secretary Tom Price for—apparently—asking questions, according to his news agency.

Daniel Ralph Heyman, a producer for PublicNewsService.org, was attempting to ask questions of the two Trump administration officials during an Affordable Care Act replacement event at the West Virginia Capitol when he was arrested, the news organization tweeted on Tuesday evening.

Dan Heyman is our producer for @PNS_WV. He was trying to ask @KellyannePolls and @SecPriceMD questions when he was arrested. https://t.co/v1rTOBV66F

According to a criminal complaint obtained by Jake Zuckerman, of the Charleston Gazette-Mail, Heyman was “aggressively breaching the Secret Service agents to the point where the agents were forced to remove him a couple of times from the area” and caused a “disturbance by yelling questions at Ms. Conway and Secretary Price.”

Update: Man arrested at Capitol was a journalist with Public News Service, not protestor. Criminal Complaint below. pic.twitter.com/Hv6uyNV3ai

In an article for the Gazette-Mail, Zuckerman said Heyman was confronted by security detail “while trying to ask a question regarding those with pre-existing conditions.”

Public News Service said in a tweet that Heyman was “performing journalism,” and they are working to get him out of jail.

The Committee to Protect Journalists said it was “concerned” about reports of Heyman’s arrest and was investigating the incident. The American Civil Liberties Union’s West Virginia chapter said it will be holding a press conference about the incident.

A video, reportedly of the incident, surfaced on Twitter on Tuesday evening.

A video of the arrest, shot by Valerie Woody with the West Virginia Citizens Action Group. 3/3 pic.twitter.com/Q1bOSotNEe