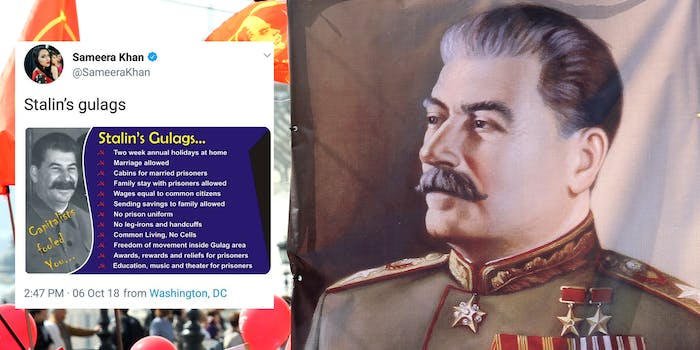 Today in an inconsequential drama that sets media Twitter aflame, we have a *spins wheel* Russia Today D.C. reporter who is *ask the crowd Mad Libs-style for a verb ending in -ing* apologizing for *rolls infinity-sided die that contains every possible outcome in the multiverse* sharing pro-Joseph Stalin memes on the timeline.

Sameera Khan sparked controversy today when she apologized for putting out some praise of Soviet gulags with a meme defending socialism as more humane than our current capitalistic, for-profit prison-system.

Sadly, the meme ignores the millions who perished in Stalin’s gulags, aka forced labor camps, so we’d have to rate it as somewhat misleading.

Not many people noticed the meme, but after she deleted her tweets, Khan’s apology caught the eye of just about everyone.

That phrasing brought to mind a very popular old tweet by Dril, the infamous Nostradamus of Twitter.

issuing correction on a previous post of mine, regarding the terror group ISIL. you do not, under any circumstances, "gotta hand it to them"

Everyone pointed this out.

you do not, under any circumstances, "gotta hand it to them" https://t.co/0xrPLTB7Mq

issuing a correction on a previous post of mine, regarding Joseph Stalin. You do not, under any circumstances, “gotta hand it to him” https://t.co/YaFlS5Xbig

It was also praised as an extremely 2018 moment, which, yea.

And although yes, Russia Today is an outlet for pro-Russia propaganda, people still felt the need to call Khan out for pushing out Russian propaganda.

A Russia Today employee fesses up to promulgating real fake news. @twitter needs to get rid of her. https://t.co/oKVlZWQ33s

Anyway, yes, gulags were bad. But being online all day has its own issues. This isn’t even the weirdest apology for misrepresenting a World War II-era leader we’ve seen on Twitter in the past 24 hours.

Did not mean to offend by quoting Churchill. My apologies. I will go and educate myself further on his atrocities, racist views which I do not support. My point was we need to come together as one nation. We are all Americans. That should transcend partisan politics.

Maybe we can hand it to FDR?