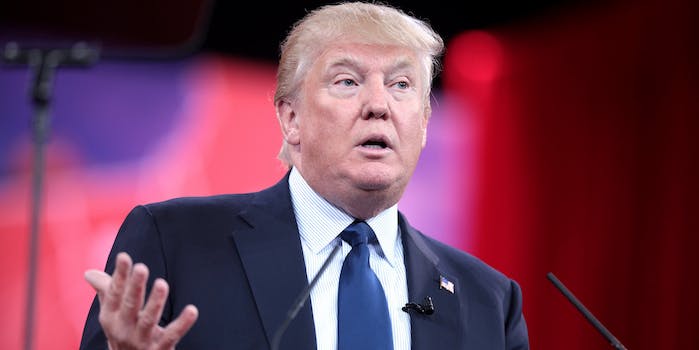 Trump has until Oct. 19 to respond.

A billionaire venture capitalist has vowed to donate up to $5 million to veterans organizations if Donald Trump agrees to release his tax returns.

Reid Hoffman, the co-founder of LinkedIn, said in a statement published on Monday that he would match the donations given to a Crowdpac campaign started by 26-year-old Marine veteran Peter Kiernan, who aims to entice the Republican nominee to release his tax returns in exchange for backing veterans organizations.

“Given Trump’s vocal support of veterans, I imagine he will recognize the great good that can come from Kiernan’s proposal,” Hoffman wrote, adding, “If Kiernan’s campaign hits or exceeds its target, I will match the total amount he reaches with a 5x contribution, up to $5 million.”

Kiernan initially aimed to raise $25,000, which he planed to donate to 10 veterans organizations, including the Yellow Ribbon Fund, the Wounded Warrior Project, and the Special Operations Warrior Foundation. Since Hoffman made his pledge, Kiernan has upped his goal to $1 million in an attempt to maximize the donation from Hoffman.

As of Tuesday afternoon, Kiernan’s campaign had raised nearly $100,000, with thousands of dollars in donations continuing to pour in.

“All military recruits make required disclosures before we are declared fit to serve,” Kiernan wrote on his campaign page. “As a man who claims to be a big supporter of veterans like me, I’m hoping this message will encourage Mr. Trump to meet our standard and show us what kind of leader he would be by finally making his tax returns public.”

Trump has so far broken some 40 years of tradition in refusing to release his tax returns, a decision he says is due to an ongoing IRS audit. The IRS says there are no laws preventing Trump from releasing his returns.

Hillary Clinton and the Democratic Party she leads have repeatedly attempted to make Trump’s tax returns a central issue in the campaign, to little success. An August Bloomberg Politics poll found that 66 percent of respondents were bothered by Trump’s refusal to make his returns public, but the issue ranked fairly low compared to other topics.

Both Clinton and her running mate, Virginia Sen. Tim Kaine, have released their tax returns, as has Trump’s running mate, Mike Pence.

Hoffman has challenged Trump to release his tax returns before the third and final presidential debate on Oct. 19.