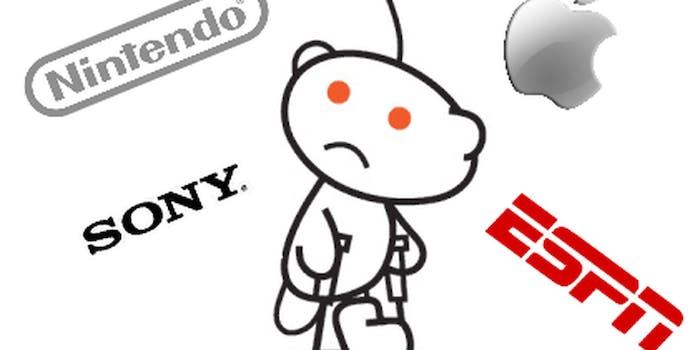 In Reddit's latest act against the controversial bill, users compiled a list of companies that support the measure to inspire boycotts.

While the debates on the Stop Online Piracy Act (SOPA) have been put on hold for the holiday season, redditors have been making a list—and checking it twice—of companies that support the controversial bill.

This isn’t the first measure the social news site has taken against SOPA. Site cofounder Alexis Ohanian made a personal plea on YouTube, users called for a boycott at the box office on Christmas, and redditors helped Sen. Ron Wyden receive the signatures necessary to take his petition to Congress.

This latest measure  was compiled using an official Judiciary Committee document in the hopes of getting redditors to write letters to the companies, along with boycotting their products and services.

“I ask the community not only to add other business in support of SOPA, but also to share known alternatives to said businesses listed or added. This is due to the pervasive grasp the multi-nationals and mega-conglomerates listed here via links already have on large parts of manufacturing etc,” wrote Goldenrule-er in a popular post on r/AskReddit. “In organizing this way I believe I and others can effectively withhold monetary support from that which we do not morally, ideologically, ethically support.”

The list of SOPA supporters from the House of Representatives includes CBS, Tiffany & Co., SONY, and Time Warner. Another list compiled by Goldenrule-er, which had about 48 people reading it at any given time, contained companies additional companies like Xerox, Apple, and Nintendo of America. Having learned of Nintendo’s support for SOPA, redditor Labut wrote the company a letter to complain.

Labut received a response from Nintendo’s Mina Harris explaining how the company “is strongly in favor of free speech” but is in favor of a law that prevents goods from being stolen.

SOPA “modernizes our criminal and civil statutes to meet new IP enforcement challenges” and provides law enforcement agencies the “tools to protect American intellectual property from counterfeiting and piracy,” according to the Committee on the Judiciary website.

Many social communities, most notably Tumblr, and Twitter, have staged their own form of censorship against the controversial bill over the last few weeks. But with this measure, Reddit hopes to transition from online awareness to real-life protests.