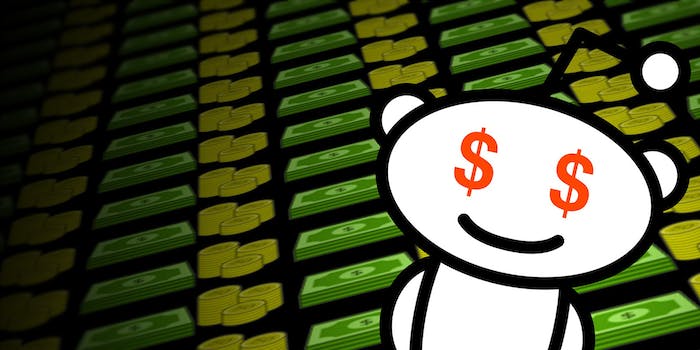 Despite Celebgate controversy, Reddit gears up for massive funding round

Reddit gears up for a new round of funding that could value the site at more than half a billion dollars.

Reddit has had a tumultuous week. The social news site became a hub for stolen photos in the aftermath of Celebgate, including what turned out to be child porn—before performing a sudden about-face on Sunday and banning the communities sharing the content without warning. But Reddit won’t let this controversy slow it down: It’s now gearing up for a new round of funding that could value the site at more than half a billion dollars, Re/code reports.

Founded in 2005, Reddit was subsequently acquired by Condé Nast before going on to become a subsidiary company of Advance Publications—Condé Nast’s parent company—in 2011. Reddit has since become an integral part of the online media landscape, and has been described by the Washington Post as “the plankton of the digital information ecosystem.”

However, it’s not without its controversies, and Reddit’s fiercely pro-free-speech and pro-anonymity platform has produced numerous scandals over the years, from the r/jailbait pseudo-child-porn communities formerly hosted on the site to the creepshots phenomenon that drew the ire of Anderson Cooper in 2012.

The reported round of funding is being coordinated with people with ties to startup incubator Y Combinator, including cofounder Alexis Ohanian. Sources have told Re/code that the “less than 10 percent of the company” is to be sold “for more than $50 million,” giving Reddit a nominal valuation of more than half a billion dollars. Other investors reportedly part of the round include Sequoia Capital and venture capital firm Andressen Horowitz.

Advance Publications currently owns a majority stake in the company, Re/code reports, and after the deal is concluded it can still expected to own “around 50 percent.”

The social news site came under heavy criticism over the past week, after stolen photos of Jennifer Lawrence and dozens of other high-profile female celebrities were stolen, and subreddit r/TheFappening sprung up to help disseminate the stolen material.

Eventually, Reddit opted to close down the subreddit and others like it for copyright reasons—but not before it brought in record-breaking traffic. The Reddit administration actively communicated with and helped the subreddit’s mods on multiple occasions.