This Internet-enabling treadmill is the solution to America’s obesity

One developer figured out a way to combine exercise and Web browsing.

The subreddit r/CrazyIdeas is Reddit’s gonzo think tank, and the ideas that come out of it are often legitimately crazy. Every once in awhile, though, an idea circulates and gains traction.

Last month, someone posted a Facebook update to the subreddit, describing a treadmill/laptop combination in which Internet speed is dependant upon how fast you’re walking. 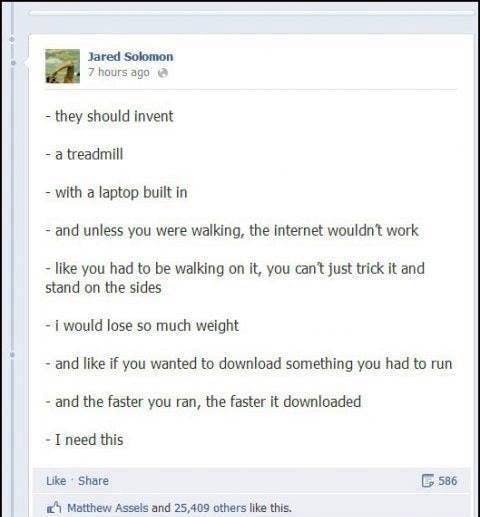 Software developer Brian Peiris decided to take the idea one step further and tried it out for himself. As an update to a project he began in March, which used a Python script to read treadmill data, Peiris took that original setup and added a Throxy script to “throttle” his Internet connection, via the treadmill. On his website, he explains a bit more:

“I’ve hacked-in a few lines that change the download throttle dynamically as content is being downloaded in to the browser. I simply run the modified Throxy code and configure Firefox to use the proxy. The faster I walk or run, the faster the content downloads.”

Here’s the idea in action:

This is still in the blueprint stage, but its potential for battling obesity is worth the dialogue. Commenters on the Reddit thread, of course, had many questions about how this would affect their porn-watching habits.