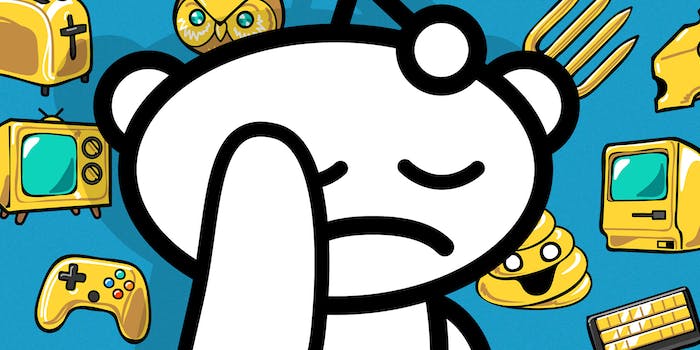 It's trolling that's gone under the radar.

Moderator DubTeeDub, who oversees r/BlackPeopleTwitter and r/AgainstHateSubreddits, flagged the issue in r/ModSupport, a subreddit for moderators to connect with Reddit administrators.

“One of our moderators sticked a series post about the lynching of a Black man, Ahmaud Arbery,” the post begins. “In response, a troll gifted a Reddit Community Award of ‘Im Deceased’ on the post. The award is a skull laughing and the text says ‘Call an ambulance, I’m laughing too hard.'”

In an interview with the Daily Dot, the moderator elaborated on the harassment, noting, “Similar posts about Ahmaud have received other racist or mocking awards as well, such as this /r/news post. You can see the ‘bow award’ is a picture of a monkey, which has obvious racial connotations and has popped up repeatedly.”

“I posed this direct question to the Reddit admins: “How long should Ahmaud Arbery posts on the front page of reddit.com literally be decorated with monkeys?” PotRoastPotato, a moderator for r/news, told the Daily Dot. “Stories about a Black man being killed are being decorated by racists with monkey icons, ‘I’m Deceased’, ‘F’, ‘Wholesome’, etc. And Reddit is refusing to provide any type of tool to prevent this from happening.”

The feature has since expanded to include silver and platinum awards, as well as more personalized Community Awards (designed for specific subreddits) and Appreciation Awards (which offer specific reactions). For moderators, it’s these new categories that have proved particularly concerning. A search for “awards” in r/ModSupport turns up multiple posts spanning months, all referring to similar issues of inappropriate awarding.

In one recent post, moderator mmm_toasty offered a “case study” of “reward abuse.”

“Today on r/science, we had a post dealing with the psychology and perception of the use of racial slurs, and, specifically, the N-word,” the moderator said. “If you look closely at the awards given to the post, you’ll note that some maladjusted, racist, and bigoted user decided it would be a good, funny idea to award the post with all of the awards depicted by monkeys (edit: the awards have since been hidden by our mod team).”

In the comments, other moderators pointed to specific instances they’ve encountered, such as a “spicy” award—for “things that carry that extra kick”—being added to posts about domestic violence, and the prevalence of awards being used to troll personal, emotional stories.

“Imagine if someone talking about how they lost a loved one to a fire, and was awarded the ‘Ignite!’ award (seen here),” commented twinned.

The awards can also be sent with messages, which DubTeeDub says are another venue for harassment. The moderator personally has received taunting notes through this method, such as, “gonna cry?” and, “What are you gonna do about it.”

Some have come through anonymously, making them difficult to report.

After the Daily Dot reached out to Reddit for a comment, administrators posted an update in r/ModNews, which pointed to tools for hiding awards.

“When the poster, commenter, or moderator hovers over an Award, they have the option to hide it – and this can be used on multiple Awards,” the post explains. “If hidden, future Awarders will not be able to give this particular Award to the post or comment.”

But the consensus from concerned moderators is that this fails to address the root of the issue.

“I am glad that they are at least acknowledging the issues, but this does not really solve anything other than giving moderators more work,” said DubTeeDub to the Daily Dot. “Users are still able to spam inappropriate or racist awards on multiple posts [and] comments on a sub anonymously, and the moderators have to go to each post individually to hide the award.”

Moderator mmm_toasty also responded, “When awards are given to posts, OP is still notified, even if the moderators of the community hide the awards after the fact. The impact of the harassment is still made, even if other redditors are unable to see the award. This does not solve the underlying problem.”

Instead, moderators are asking Reddit for the ability to disable certain awards in their subreddits. Moderator BuckRowdy posted, “The troll face award along with a few other awards, (I’m deceased) are completely inappropriate on nearly every sub that I’m on and I would like the ability to prevent these awards from being used on posts. I’m aware that awards can be hidden, but I don’t think that’s good enough.”

Others echoed that request, noting awards that have no appropriate use in their channels.

A Reddit spokesperson told the Daily Dot the site is “working on ways to build additional safety features for the awards feature.”

Administrators responding in r/modnews offered a more concrete timeline for updates, saying, “We’re going to be spending time over the next two weeks looking at data about award usage specifically in how they are being used in an abusive manner. Once we’ve done that we’ll post here again to let you all know our next steps.”