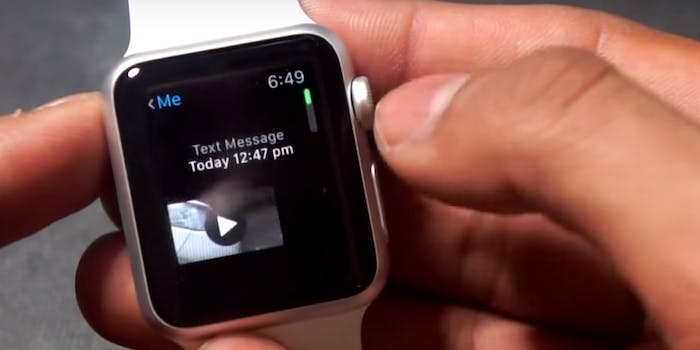 Screengrab via The Gadget Book/YouTube

The storied club is in hot water.

The Boston Red Sox have reportedly been using an Apple Watch to steal signs from their opponents, according to a report from the New York Times.

MLB investigators are said to have discovered that the storied baseball team was using the wearable to relay which pitch the opposing team would throw next. The Red Sox admitted that for weeks their trainers received signals from video replay personnel and sent it to players who were up to bat.

The Times reports Yankees’ General Manager Brian Cashman filed a complaint with the commissioner’s office against rival Red Sox weeks ago. Reportedly included in the complaint was a video showing the Red Sox’s assistant athletic trainer looking at his Apple Watch and sending information to outfielder Brock Holt and second baseman Dustin Pedroia.

Not to be singled out, the Red Sox responded by filing a complaint against the Yankees, claiming the team uses video from its YES broadcast channel to steal hand signals. The back-and-forth adds another chapter to one of the fiercest rivalries in sports.

Stealing signals is a part of baseball, and some forms are even acceptable. The most common is when a runner at second base sees what sign the catcher is giving to his pitcher and relays it to the batter with a secret gesture. Using binoculars or electronics, however, is forbidden.

The Red Sox are in first place in their division and on track for a playoff berth. It’s not clear what punishment, if any, MLB Commissioner Rob Manfred will impose on the two teams.