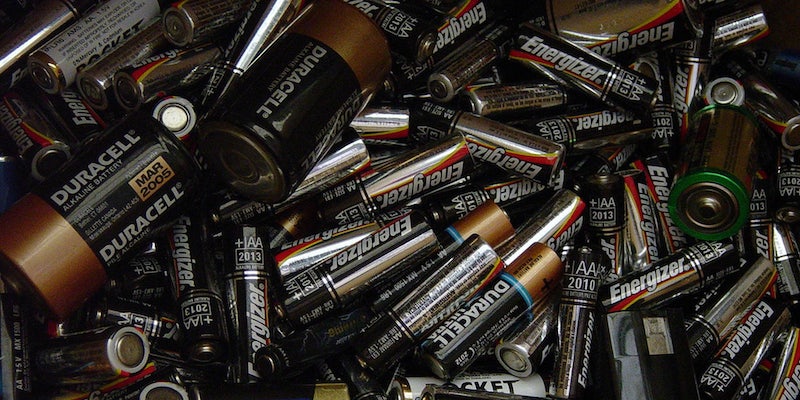 This new rechargeable battery will last an entire lifetime

Your batteries are full of useless liquid.

Modern rechargeable batteries contain a liquid electrolyte that stores and releases energy as you use and recharge your device, but scientists from MIT and Samsung are working on more powerful solid-state electrolyte batteries that could radically change our charging habits.

Previous solid-state electrolyte research fell short of being able to generate enough electricity to be useful, but the researchers on this project have overcome that problem.

Their solid electrolyte is called a “superionic lithium-ion conductor,” composed of lithium, germanium, phosphorus, and sulfur. It makes their battery design better than standard batteries in all the ways that matter: Its lifespan can last for hundreds of thousands of charges, it stores more energy in the same amount of space, and it also addresses some safety concerns present with other batteries.

Liquid electrolytes are unstable enough that they can cause battery fires. This is not just about your iPhone battery exploding in your pocket, but also the batteries that might start fires in a car or airplane. “All of the fires you’ve seen, with Boeing, Tesla, and others, they are all electrolyte fires,” researcher Dr. Gerbrand Ceder told MIT News. “The lithium itself is not flammable in the state it’s in in these batteries. [With a solid electrolyte] there’s no safety problem—you could throw it against the wall, drive a nail through it—there’s nothing there to burn.”

In addition, rechargeable batteries tend to degrade over time with use and recharging: Apple says a properly maintained iPhone battery will only retain 80 percent of its capacity after 500 charge cycles. But there’s no such compromise to be made here. Instead of talking about battery degradation after hundreds of cycles, the new battery design would remain useful after hundreds of thousands of cycles. It would be the last rechargeable battery you’d ever buy.

The improvements don’t stop there. The solid electrolyte also features a more substantial energy density, storing 20-30 percent more electricity in the same amount of space. This is significant because batteries already require so much space in order to be useful to the device they power. A battery of equal size operating on this paradigm will vastly outperform its liquid electrolyte counterpart; without any physical changes to our gadgets, implementing this type of battery would instantly make them last longer per charge and remain useful longer.

This is hardly the first battery breakthrough to come out of MIT: Another group of researchers recently developed a battery technology that could keep your smartphone running for three days on one charge.

However the batteries of the future ultimately come together and make their way to consumers, one thing’s for sure: It’s going to be way less of a pain when you forget your charging cable at home.