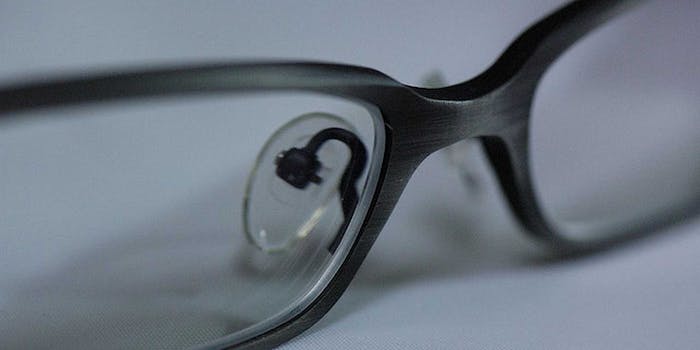 The human cliches that belong to the new Google Glass frames

Google Glass continues its push toward the mainstream, and though fashion icon Diane von Furstenberg may have embraced them, they still make wearers look weird and dorky. Sort of like a rejected extra from a low-budget 1980s made-for-TV sci-fi flick. If they were the end result of a design challenge on Project Runway, Heidi Klum would’ve auf wiedersehen’d them, and fast.

But things are getting brighter for Glass fans who also don’t want to look like bigtime nerds: now Google is offering prescription frames to supplement the original headgear, and some of these frames take the look from “celibate cyborg” to “augmented aesthete.” Designer Isabelle Olsson (and not Warby Parker, which was the rumor floating around) decided on the new styles, opting for simple, versatile shapes flattering to most faces.

The frames are available for $225, and they do wonders for the look of Glass. The prescription lenses need to be filled by an eye care provider, which is a hassle, and Glass still costs $1,499 for people accepted into the Google Explorer program, so they’re neither convenient nor cheap. But VSP, a large optical health insurance provider, has said it will subsidize the costs of the Google Glass lenses and frames, so the price may be reduced for covered users. And I suspect these frames will become a popular way to wear Google Glass for all sorts of people, not just those of us afflicted with crappy eyesight.

The frames are meant for people with prescription glasses, so they don’t have to try to layer Glass over normal glasses, but it wouldn’t be surprising if they get adopted by standard-sighted folks, because the extra cost is worth it considering how much better-looking the Glass-and-frames combo is compared to bare Glass.

Here are the four new frames, ranked according to a very specific criterion I’ve created based on what kind of person would wear each frame style:

Please ignore the extremely handsome man underneath and focus on the frames. They’re OK, but kinda “vegan math-teacher-y” and not in a good way. They look like they belong to someone who went to Denmark once and will NOT shut up about it. This person always brings over-seasoned kale chips to dinner parties and always tries to convince you to try slacklining.

The “Split” frame’s slightly more tolerable cousin. Makes much better dinner party food but won’t stop bringing up Foucault. Jokingly calls Glass her “personal panopticon.” She volunteered to do free graphic design for your band’s website, though, so.

Isn’t, like, the coolest guy in the world, but he gave you a ride to the airport on a Saturday morning and his homebrewed mead actually tasted good.

Exclusively worn by girls who own at least four figure-flattering vintage dresses. These glasses invited you to their experimental comedy showcase and you’re actually excited about going because these glasses have amazing hair. These glasses play bass in a noise band but put on a Smokey Robinson vinyl while they cook shrimp scampi for you in their frighteningly well-appointed kitchen. These glasses will cheat on you with your friend Ned but you will love them anyways.