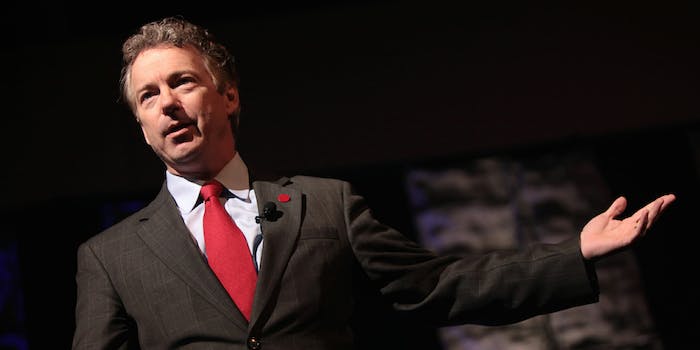 The senator caused a brief government shutdown to prove a point.

In the end, the government shut down, briefly, because of Sen. Rand Paul (R-Ky.)

Paul was a central figure in Congress being unable to pass a spending bill on Thursday night, leading to a brief government shutdown that ended after the Senate and the House of Representatives passed a two-year deal that will keep the government funded for six more weeks hours later.

The short shutdown on Friday morning was the second shutdown that has occurred during President Donald Trump‘s presidency.

Paul, a fiscal conservative, used procedural tactics to block the Senate from voting on the bill before the midnight deadline.

While speaking against the Senate bill, Paul railed against the procedure in which it was taken onto the floor—he lamented the last-second nature of the bill—and criticized a lack of discussion regarding amendments being added to it. Paul wanted to add an amendment to the bill that would set budget caps to the spending bill. Senate Majority Leader Mitch McConnell did not allow for the amendment to be added, triggering the short shutdown.

“We wait until the very last minute. So we’ve waited all week long to put this at the very end of the week and let it expire toward the end as people get tired—and then everybody says ‘well you don’t want to shut down government do you?’ I really don’t,” Paul said late Thursday. “My intention has never been to shut down government, but my intention is also not to keep it open and borrowing a million dollars a minute.”

The Kentucky senator also criticized his Republican colleagues for embracing the bill—which would add to the government deficit—when years ago they railed against President Barack Obama‘s administration for wanting to do the same thing.

Sen. Rand Paul to Republican colleagues: "How come you were against President Obama's deficits, and then how come you're for Republican deficits? Isn't that the very definition of intellectual dishonesty?" pic.twitter.com/thnTl2E7SB

Paul’s blockage of the Senate vote didn’t sit well with some of his colleagues.

Rep. Charlie Dent (R-Penn.) told Politico that given the speech on Thursday night, he could “understand” being annoyed as Paul’s neighbor—referencing an incident last year where the senator was attacked by his neighbor at his home in Kentucky.

“When Rand Paul pulls a stunt like this, it easy to understand why it’s difficult to be Rand Paul’s next-door neighbor,” Dent reportedly said. “The whole delay and filibuster exercise on the budget agreement is utterly pointless.”