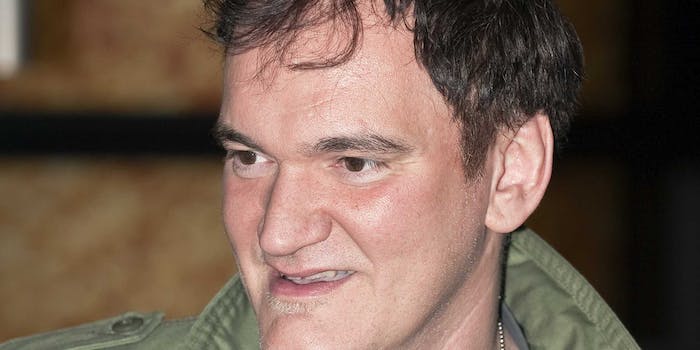 'It’s no surprise that someone who makes a living glorifying crime and violence is a cop-hater, too.'

A lot of people are practically chomping at the bit to see The Hateful Eight, the upcoming western from film auteur Quentin Tarantino. The union representing America’s largest police force is considerably less excited.

On Sunday, Patrolmen’s Benevolent Association President Patrick Lynch, whose group is the largest labor organization representing members of the NYPD, called for a boycott on Tarantino’s movies after the Academy Award-winning director spoke at a rally in Manhattan over the weekend against police brutality.

Lynch slammed Tarantino’s criticisms of police violence against African-Americans across the country as insensitive for coming only a few days after a New York police officer was fatally shot while chasing a gunman in East Harlem.

“The police officers that Quentin Tarantino calls ‘murderers’ aren’t living in one of his depraved big-screen fantasies—they’re risking and sometimes sacrificing their lives to protect communities from real crime and mayhem,” Lynch said in a statement to the New York Post. “It’s no surprise that someone who makes a living glorifying crime and violence is a cop-hater, too.”

“New Yorkers need to send a message to this purveyor of degeneracy that he has no business coming to our city to peddle his slanderous ‘Cop Fiction,’” Lynch continued.

Tarantino spoke during a march on Saturday that served as a culmination of three days of protest, organized in part by author and activist Cornell West, dubbed #RiseUpOctober.

Tarantino’s speech memorialized Tamir Rice, a 12-year old boy killed by police in Cleveland while he was playing with a toy gun in a public park.

On Nov. 2, 2014, Tamir [Rice] was playing with a toy gun in a park. After a 911 call where the caller said the gun was probably a fake and the person holding it was probably a juvenile, police rushed onto the scene and shot Tamir within two seconds. Then they knocked down and handcuffed his sister and locked her in a police car… They would not allow his mother to hold her lifeless child, who laid dead in the street. After almost a year, there have been no charges filed and not even a grand jury selected.

Lynch has a long history of angrily denouncing the police department’s critics in the entertainment industry. In 2000, he slammed Bruce Springsteen after the rock legend released a song about the death of Amadou Diallo, a 22-year old immigrant from Guinea who was shot 41 times by NYPD officers while unarmed. Lynch urged for a similar boycott for police officers who moonlight as private security guards not to work Springsteen’s then-upcoming concert at Madison Square Garden.

As Deadline reports, Tarantino noted that timing the rally so soon after an officer’s death could be viewed as problematic, but stood by his comments. “It’s unfortunate timing, but we’ve flown in all these families to go and tell their stories,” he said. “That cop that was killed, that’s a tragedy too.”

The Hateful Eight is slated for a Christmas-Day release.

Photo via Siebbi/Wikimedia Commons (CC BY 3.0)