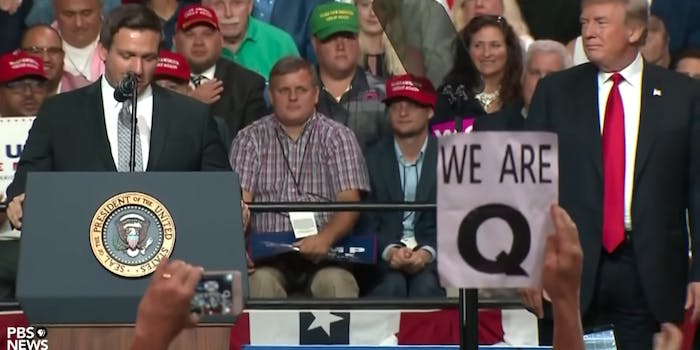 'People on the left would paint us as the bad guys.'

QAnon supporters claim they were asked to hide their Q shirts at President Donald Trump’s reelection rally on Thursday in New Hampshire, according to the Hill.

QAnon is a group of pro-Trump, right-wing conspiracy theorists, who believe the “deep state” is out to get the president. The group got its start several years back on 4chan, an imageboard website that people typically post on anonymously. Claiming to be a government insider, someone under the name “Q” began posting conspiracy theories that put Trump in a favorable light.

Since then, the group has grown and often showed their unwavering support for Trump at his rallies. But this go-around, two QAnon supporters told the Washington Post that the Secret Service asked them to turn their shirts inside out, hiding the Q. One of the supporters said he suspected the Secret Service did so because “people on the left would paint us as the bad guys.”

The Secret Service told the Hill that this is not true.

“The U.S. Secret Service did not request, or require, attendees to change their clothing at an event in New Hampshire,” Secret Service spokesman Jeffrey Adams told the Hill.

But a member from Trump’s campaign office did tell the Hill that “no non-Trump-related political messaging is permitted inside the venue.”

This isn’t the first time QAnon has made news at a Trump rally. In July, Twitter was in an uproar over Trump saying hello to a baby who was wearing a Q shirt at his rally in North Carolina.

The Federal Bureau of Investigation (FBI) recently declared QAnon to be a domestic terrorism threat.