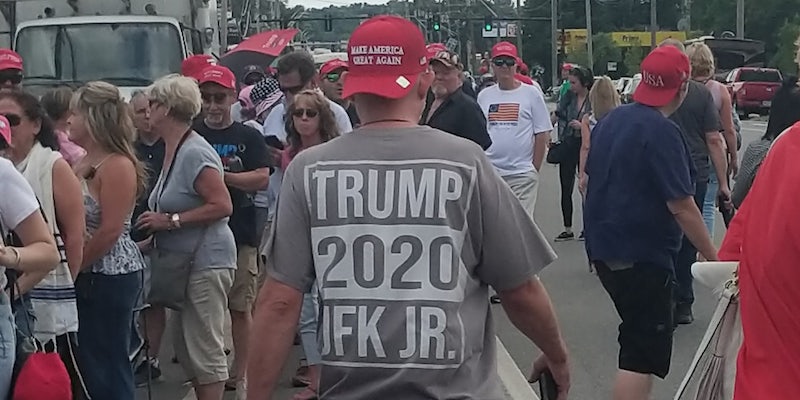 QAnon followers are convinced Trump is bringing out JFK Jr. at Saturday rally

Believers of the QAnon conspiracy theory are convinced that John F. Kennedy Jr. (JFK Jr.) will emerge on Saturday and announce himself as President Donald Trump’s new running mate.

The conspiracy began in 2018 after “Q,” an alleged all-knowing government insider who posts clues online regarding an imaginary battle between Trump and a global child-eating pedophile ring, mentioned JFK Jr. for the first time.

The mere mention of JFK Jr. led the conspiracy’s most ardent followers to create the theory that he was in fact still alive, despite dying in a plane crash in 1999, and would reemerge one day to back the president.

The theory has since morphed into the claim that JFK Jr. will reveal himself as Trump’s new running mate during a campaign rally on Oct. 17.

Unfortunately for QAnon followers, the conspiracy fails to take into account numerous issues, including the rules that govern the 2020 presidential race.

Not only is it legally too late to have Vice President Mike Pence replaced on the ballot, but millions of Americans have also already voted.

Incredibly, this isn’t the first time QAnon believers have said that JKF Jr. would reappear. The group also alleged in 2019 that JFK Jr. would rise to help usher in “the storm,” the mythical event that sees Trump arrest and execute all of his political foes.

Another stumbling block to the theory is the inconvenient fact that Trump will not even be in Dallas Saturday. He’ll be in Wisconsin instead. So why are QAnon believers convinced of a Dallas rally?

It appears the entire theory stems from a single tweet from September containing an image, likely created last year, regarding the JKF Jr. revival.

Despite that even a summary glance at the news would point to Trump holding a rally in Wisconsin Saturday, countless QAnon followers are convinced they’ll see both the president and JKF Jr. in Texas.

News of the bizarre prediction comes just days after Trump declined to denounce the conspiracy during a televised town hall event.