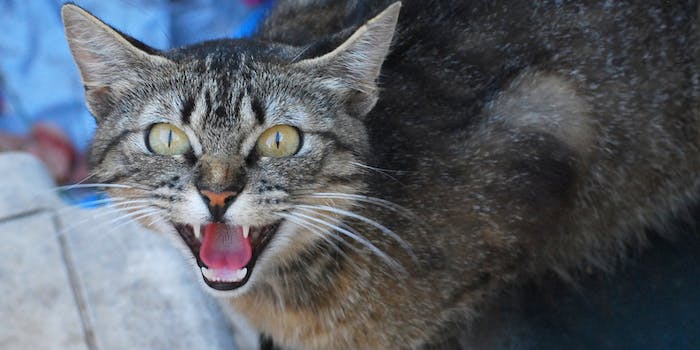 Cats may be the Internet’s mascots. But nobody would say that YouTube clips of Tigger falling off a bouncy ball, landing in a bucket of cream and licking his paws would make political tyrants think twice about clamping down on Internet rights.

This may not be the case, however, once dictators have reckoned with the Pussycat Riot campaign’s fierce new product range. Hawked by the privacy network HideMyAss.com, a virtual private network (VPN) provider, felines are cast as the Internet’s guardian warriors in the scratching war against tyrannical Web censorship.

“We applaud cats who embrace an open internet, and freedom of expression,” the company said its announcement of the campaign. “We take our hat off to cats who stand against Internet oppression, and censorship, which is why we are very proud to announce our  ‘Cats-against-cyber-censorship’ movement, The Pussycat Riot.”

Items for sale include a Vladimir Putin scratching posts, at the modern-art price of about $7,500 each. For freedom lovers of more modest means, $5 buys a litter tray emblazoned with images of the most notable “Internet dictators.” Although they’re sold out, the lucky cats whose owners got there early will be able to shit onto the faces of North Korean despot King Jung-un and Turkish prime minister Recep Tayyip Erdogan, who famously tried to ban social networks.

The Cats Against Cyber Censorship crew argue that the Internet’s most famous felines are a “symbol of all our freedoms.” They even claim the endorsement of legendary Internet kitties Princess Monster Truck, Nala, Stitch and Jarvis P Weasley. (Grumpy Cat is notorious for his absence.)

HideMyAss.com is asking Instagram users to join the cause with the hashtag #thepussycatriot, which has garnered more than 260 submissions at the time of this writing.

Ultimately, the products and the puns are a pretty smart marketing move by an Internet security company. For a small fee, customers to HideMyAss get access to a VPN that can help shield them from snoops.

So far, the Kremlin has not responded to requests for comment.