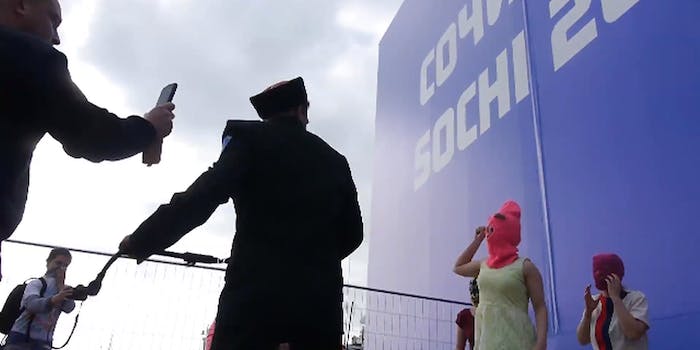 The lyrics touch on surveillance during the Olympics, censorship, and justice for those arrested during an anti-Putin rally.

On the same day members of Pussy Riot were whipped by Russian Cossacks after attempting to perform in Sochi, a music video from the collective finally surfaced. It includes footage from yesterday’s incident, as well as the arrest of several members on Tuesday, which was livetweeted.

The song’s called “Putin Will Teach You to Love the Motherland,” and the lyrics touch on surveillance during the Olympics, censorship, and justice for those arrested during a May 6, 2012, anti-Putin rally. The video was supposed to be debuted Thursday morning at a press conference in a Sochi hotel, but the event was canceled 30 minutes before, after the hotel cited a burst pipe. They held the press conference on the street.

It’s not clear who exactly Pussy Riot comprises right now, or if there are separate factions. Earlier this month, Nadya Tolokonnikova and Masha Alyokhina, two formerly imprisoned members who are featured in the video, came to the States and spoke at the Amnesty International Concert in Brooklyn, and gave this excellent Colbert Report interview. During that time, other members of the group attempted to distance themselves from the two. An anonymous blog, written Feb. 6, addresses the issue:

We are proud of their resistance against harsh trials that fell to their lot, their determination by all means continue to struggle started during their stay in the colonies.

Unfortunately for us, they are so carried away with the problems in Russian prisons that completely forgot about the aspirations and ideals of our group: feminism, separatist resistance struggle against authoritarianism and the cult of personality, because they actually got their unjust punishment.

Now it is no secret that Masha and Nadia out of the group, and will no longer engage actionism. Now they are engaged in a new project. Now they protect the rights of prisoners.

But it appears one faction has shifted their focus to Sochi and Putin’s policies, and they made Russian Cossacks whipping activists the stars of their video. In terms of the medium being the message, they couldn’t have asked for better material. The video also calls for others to join them tomorrow in Moscow, where a ruling in the May 6 case will be handed down.