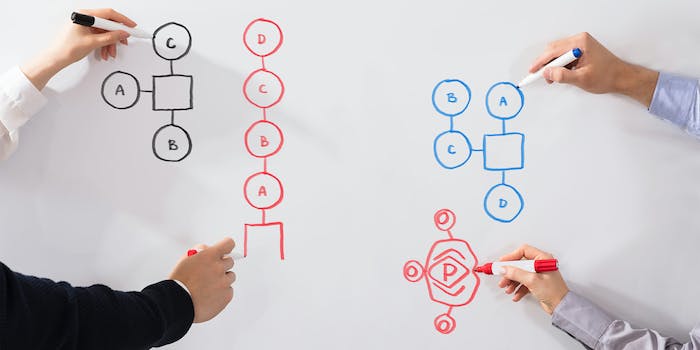 Brown has a radical new vision for journalism and activism in the internet era.

Barrett Brown’s radical vision for a “vast and formidable ecosystem of opposition to institutional injustice” first came to life, in technical sketches and notes, while he was still in prison.

He calls it the Pursuance system, a fully encrypted platform that will enable and equip individuals to carry out exactly the kind of adversarial work that he engaged in before his arrest.

From 2009, Brown had been leading a close team of transparency activists and researchers in Project PM—a collaborative investigation into the surveillance state.

The group would dig through enormous file dumps of internal documents and emails stolen from private security and intelligence contractors, exposing the schemes and surveillance apparatus of companies like HBGary Federal.

Project PM activists communicated through an internet relay chat room, utilized third-party tools, and managed a wiki through which they would publish findings. The set up was simple, but it worked and formed a basic framework for how Brown imagined activists might organize. It was also then that Brown coined the term Pursuance, as a descriptor for a group of activists autonomously working via the internet toward a common end goal.

Before Brown or anyone else at Project PM could carry forward the idea of pursuance entities, however, he was raided by the Federal Bureau of Investigation during a livestream and indicted on 12 federal charges related to a hack on private intelligence firm Stratfor performed by Anonymous hacktivists.

Although Brown’s work had brought him into close association with Anonymous, the breach had occurred nine months earlier without Brown’s foreknowledge or participation. Regardless, the prosecution accused him of participation based on a hyperlink that he had copied and pasted into a Project PM chatroom that linked to information stolen during the attack.

While many of the initial charges were dropped as part of a plea bargain, Brown was convicted of after-the-fact involvement and threatening an FBI agent in January 2015. He was sentenced to 63 months in prison.

Brown’s fame grew as he continued to work, chronicling his battles with the Bureau of Prisons in award-winning jail cell contributions to the Intercept, and so did his secure place in the public consciousness, with his inclusion as a plot point in political drama House of Cards. During that time, the world that Project PM inhabited all but disappeared.

So it was with great enthusiasm that internet activists from around the world not only celebrated his release in November but banded together to help develop the Pursuance system into a reality.

Central to that effort is lead software developer and project manager Steve Phillips. He was one of the first to jump on board with Pursuance when he read about Brown’s idea in March, immediately making plans to fly out to Brown’s home state, Texas. When the pair met to discuss the idea and its potential, Phillips knew he wanted to part of what was happening.

“Barrett wanted better tools for what he did in 2011,” Phillips said in a recent interview. “He wanted to create a secure environment that would also make activists and journalists more effective.”

Now, however, Phillips is bringing his knowledge and experience to the table in designing the framework. He has started to recruit other trusted software designers and developers to really get the project moving.

The first publicly available web version of the Pursuance system is set for launch in October 2017. Until then, Phillips and his team will be concentrating on the prototyping and testing of two core features—LeapChat and Ensue.

LeapChat is an end-to-end encrypted chat facility that Phillips had started writing before he met Brown. Ensue will serve as the task management application. It’s being designed to optimize cooperation between volunteers by helping them connect by skill set and providing automatic assistance with progressing project tasks. The code for both applications is open source and freely available on GitHub.

“The versatility of the platform is, in my opinion, its greatest asset,” Annalise Burkhart, director of operations for Pursuance, told the Daily Dot. “I want to equip activists, journalists, and passionate individuals with tools to collaborate and promote their respective projects.”

Burkhart first became aware of Brown during his court case. When the opportunity arose, she, like Phillips, flew to Dallas to meet with him.

As director of operations, Burkhart’s role is to oversee the day-to-day activities of Pursuance, liaise with users and establish contact with various interested individuals and organizations across the globe. She brings consultative experience to the Pursuance inner circle, having previously helped NGOs secure funding through grant applications.

“Pursuance aims to unify like-minded individuals with the purpose of pooling resources, dispersing tools to enact social change, and establishing a system of accountability to produce tangible solutions for the greater good,” Burkhart said. “Imagine the effectiveness of a network of individuals, all equipped with a variety of skills to meet the demands of a certain issue, working simultaneously with hundreds of other entities focused on similar pursuits.”

Like any project, Pursuance will require funding and an organizational front to that end—although, short of a Bitcoin address on the project’s website, details on both remain officially unannounced. What is known is that for Pursuance to succeed it will require users.

“We’re capitalizing upon interconnectivity,” Burkhart continued. “The system will be seeded with passionate people who may not necessarily care about the same cause, but understand the importance of organizing in the face of injustice.”

At this pre-alpha stage of development, the team is doing just that and populating dedicated chat rooms on Mattermost on an invitation basis ahead of onboarding users into an alpha version when it is ready. To coordinate that, Burkhart has some help.

Overlooking the onboarding process on behalf of the core Pursuance team is Ray Johansen, a board member of Pirate Party International. This is indicative of the particular political bent apparent in the individuals that have been selected already.

Johansen, who defines himself first and foremost as an activist, makes clear that he believes his network will benefit extensively from Pursuance; many Pirate Party members are privacy advocates or transparency and internet freedom activists.

“There has never been a system directed at exactly this type of activity while supplying the tools and the security to be able to do it unhindered,” Johansen said to the Daily Dot. “People have tried to do it. I have been in activist circles and seen hundreds of tools and projects with tools designed to do one task, but never a whole toolbox.”

Currently, there are 66 individuals populating more than a dozen channels on the ‘Activism’ pursuance instance—the only one so far, which was largely organized by Johansen. He describes those populating the network as “top-tier people” with history and experience in fighting for civil liberties.

“A lot of the people we have invited have been effective and successful in some way or another for a number of years,” he said.

“We are getting in all kinds of different people with different skill sets. I would like a group of testers that consists of transparency activists, investigative journalists, FOIA specialists and hackivists actually joining forces on one particular project that exists,” Johansen continues. “We have the capable people doing that already in here.”

“But I want more people like that to reach out to me,” he said.

Finding eager volunteers hasn’t been difficult to date. Brown’s association and name, of course, attracts those who align with his vision, but it also throws up a flag for those who may wish to co-opt or oppose the project. The Justice Department, for one, has shown sustained interest in keeping tabs on Brown, issuing subpoenas to his Defense Fund and, post-release, to the Intercept.

As such, security is taken seriously. So, while Johansen meticulously vets prospective users with a view to sculpt Pursuance to complement their own activism, the procedure is largely motivated by security concerns and caution.

Johansen has long been involved with organizations like FreeAnons and regularly advocates on behalf of hackers facing prison and government whistleblowers. He most recently organised the #freeBogatov social media campaign to draw attention to the arrest of Tor node operator Dimitry Bogatov in Russia. Through his work, he has witnessed first-hand government repression of the left-leaning libertarianism and hacker ethic that characterized the leaderless political movements of the early 2010s and, in its place, the rise of the digitally native alt-right and its nihilistic brand of anti-establishment sentiment.

Important lessons have been learned.

“Here is a possible resurgence of what we have seen in the past,” Johansen reflected, “The vision of Pursuance gave me that thought.”

It’s obvious that for Brown, who was released from prison just weeks after President Donald Trump’s electoral victory, the mission is as necessary and as clear as ever.

“We know that mass connectivity does not automatically lead to mass enlightenment. We know that states will sometimes seek to use the internet to further their control over information and that they will sometimes be successful in this. We know many things of this sort,” Brown writes in his introduction to the Pursuance system.

“How the next few decades unfold will depend on who takes best advantage of this unlimited power to recruit and organize.”