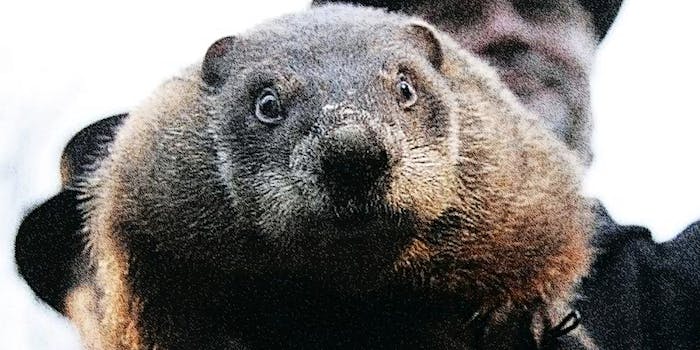 Every winter, a groundhog pops out of a hole, and if it sees its shadow, well, we all know how that goes: more cold.

It probably won’t surprise you to learn that Punxsutawney Phil—the famous Pennsylvania varmint, who did not see his shadow this year—is an abhorrent weatherman. In fact, you’re better off flipping a coin to gauge the arrival of spring than trust his judgement.

For all the hoopla, Phil’s prognostications about the arrival of spring are correct only about 39 percent of the time, according to the Stormfax Almanac.

What may actually surprise you—but probably shouldn’t—is that Iowa primary voters are only slightly more likely to pick the next president of the United States than ol’ Phil is to predict the coming of warmer weather.

Out of 10 caucuses between 1976 and 2008, eight of the winners went on to secure their party’s nomination.

Out of 10 Iowa caucuses between 1976 and 2008, eight of the winners went on to secure their party’s nomination. Since 1980, six out of eleven candidates—roughly 55 percent—became presidential nominees after winning in Iowa, excluding incumbent presidents who ran unopposed. In 1988, Rep. Dick Gephardt (D) and Sen. Bob Dole (R) both won the Iowa caucus, but neither was nominated by his respective party.

When it comes to picking the next commander-in-chief, however, it gets a bit more complicated.

Sen. Ted Cruz (R-Texas) may have seized Donald Trump’s Big Mo on Tuesday night, but as history demonstrates, the odds he’ll be nominated at the Republican National Convention in July and then move on to become president are mediocre at best.

You may have heard that every candidate who has won the Iowa caucus over the past 20 years has moved on to accept their party’s nomination to be president—and that’s true, but it’s also misleading. In 1996, President Bill Clinton ran unopposed for a second term, thus “winning” by default. The same is true of President Barack Obama in 2012, President George W. Bush in 2004, and even further back, President Ronald Reagan in 1984.

Following a stint as director of the Central Intelligence Agency, George H. W. Bush ran for president in 1980 and won the Iowa caucus over Reagan by nearly 2 percent of the vote, but he wound up serving as vice president to Reagan until 1989. And although he succeeded Reagan, Bush Sr. placed third in the 1988 Iowa caucus, behind Pat Buchanan and Senate Minority Leader Bob Dole.

In an election year, there will always be one Iowa victor packing his bags come November.

As Arkansas’s former governor, Clinton went on to seize the Democratic nomination in 1992, but he suffered a spectacular loss in Iowa, receiving a measly 2.8 percent of the vote. Sen. Tom Harkin, who won the support of more than three-fourths of Iowa’s caucus voters, conceded following a negative performance in New Hampshire to become the first Democratic candidate to throw in the towel.

In the past 36 years, only two non-incumbent presidential candidates—George W. Bush and Barack Obama—have won the Iowa caucus and gone on to become president.

In other words, there’s only a 20 percent chance that winning Iowa means winning the White House, according to caucus data dating back to 1980.

Of course, winning Iowa and seizing a party nomination does not make someone commander-in-chief. In an election year, at least one person will pack his or her bags come November, regardless of the Iowa caucus results.

So, will winning the Iowa caucus ensure Ted Cruz a White House victory? You’re better off yanking a groundhog out of a hole to find out.

Photo via Alessandro M./Flickr (CC BY 2.0) | Remix by Jason Reed