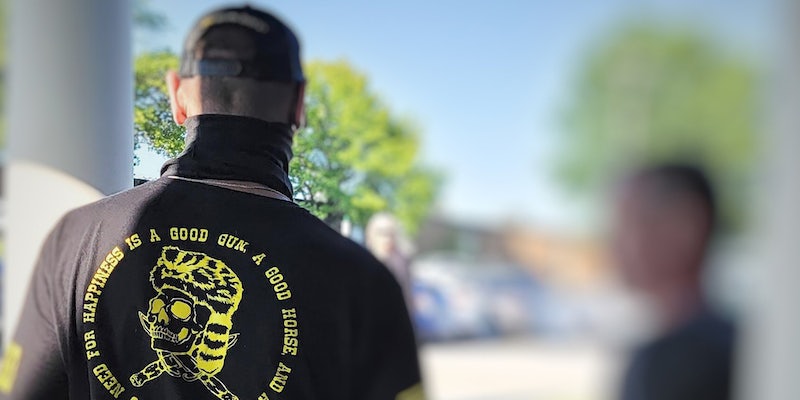 An online fervor cascaded over.

Residents of a small town in Missouri are up in arms over claims a local teacher displayed a Pride flag in her seventh-grade classroom. The controversy stemming from Facebook groups dedicated to matters concerning Camden County, Missouri inspired at least one member of the Proud Boys in full regalia to show up to the school board meeting on Monday night.

Over the last week, local residents have passionately debated in Facebook groups about whether it’s appropriate for a teacher to display an LGBTQ Pride flag. (Some unverified reports indicate the teacher also displayed a transgender Pride flag.)

A local politician who appears to have posed for photographs with the Proud Boys was among the strongest advocates against the teacher specifically and displaying Pride flags in schools generally.

Last week, Camdenton Alderman Daniel Ousley used the Facebook group Citizens for a Better Camden County to criticize an unnamed local teacher for displaying a Pride flag. “Stop indoctrinating and grooming our kids!” Ousley wrote, according to screenshots of a post that appears to have been deleted

In a subsequent post in the same group, Ousley opined that the local school system should ban Pride flags from classrooms entirely.

Arguments broke out in the comments. Many in the group agreed with Ousley. Others said that schools should be accepting and inclusive of children regardless of sexual orientation or gender identity.

“I just want to say I thank God that students are far more accepting of their peers than the bigoted adults,” wrote one person who supports teachers displaying Pride symbols in their classrooms.

Citizens for a Better Camden County is currently filled with passionate debate about the flag and reading materials in the school library. Some accused educators of “grooming” children, a bigoted accusation that falsely likens LGBTQ people and their allies to pedophiles.

Others pushed back and opined that schools should be safe and welcoming of children regardless of sexual orientation or gender identity or those of their families.

“I think it’s nice that there’s a teacher at Camdenton that is openly accepting of kids who might be different than 90% of who goes to school there,” a local resident wrote in the group. “I remember kids in my grade having to hide who they were, and being ashamed of who they were, and older kids who took their lives because of the pain and shame of having no one to accept them.”

Recent posts in the LOTO Politica Facebook group are similarly focused on the drama over the Pride flag. The matter spilled into the real world on Monday evening when a Proud Boy showed up at the Camdenton R-III School District Board of Education meeting.

Laura Burkhardt, leader of the Missouri branch of gun control advocacy group Moms Demand Action, tweeted photos of the man wearing a Proud Boys T-shirt and symbols to the meeting.

“Today the Proud Boys, dressed in hate symbols, showed up at the Camdenton School Board meeting (Missouri) with the intent to intimidate a teacher over a small Pride flag in her classroom,” Burkhardt wrote.

Burkhardt added that the Proud Boys targeted the teacher with “hate-fueled intimidation” for displaying a four-inch long Pride flag in her classroom. Twitter users were appalled to see the far-right group targeting a school system.

Burkhardt and others echoed claims that local Republicans and the state GOP were involved with the push to force the unidentified teacher to remove the Pride flag.

“This is political violence and it’s sponsored by the [Missouri] GOP,” Burkhardt tweeted.

The teacher has reportedly taken the Pride flag down. Screenshots circulating on multiple social media platforms show a letter from the school board saying that it had “been made aware of certain items being displayed on campus that may contradict Board policy.”

“For the time being, the items in question have been voluntarily removed … until the Camdenton Board of Education can further review.”

The Camdenton school board didn’t respond to a request for comment sent via email Tuesday morning.