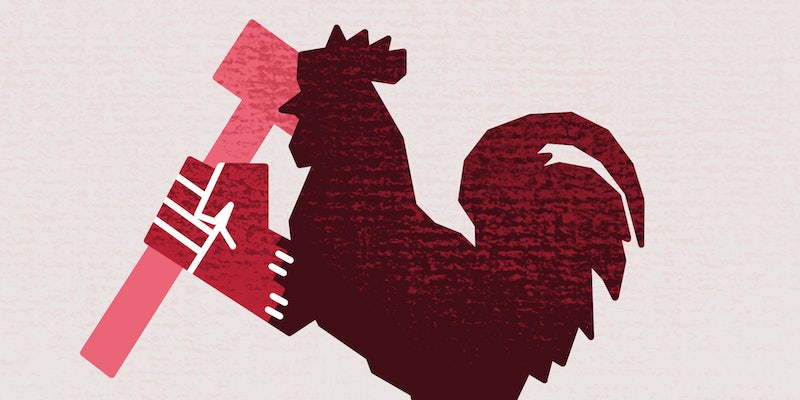 They have common enemies, but it's highly unlikely the Proud Boys would work with Black Hammer.

On Monday, Black Hammer made the stunning announcement that it’s forming a coalition with the Proud Boys. People have significant doubts this is true.

Theirs is an exceedingly unlikely partnership. Black Hammer is a Black-led organization that says it wants “to take the land back for all colonized people.” Many, including former founders and members, have called it a “cult.”

The Proud Boys are a far-right extremist group whose chats are littered with slurs about Black people and other marginalized groups. (The Proud Boys claim they’re not racist.)

The two do share some common enemies, however. Both loathe liberals, former President Barack Obama, and have been credibly accused of antisemitism. There are no shortage of examples of Proud Boys and their sympathizers being antisemitic. This year, Black Hammer has notoriously referred to Holocaust victim Anne Frank as a “colonizer” and “bleach demon.”

On Monday, Black Hammer tweeted, “The Black Hammer Organization and the Proud Boys are FORMING A COALITION to defeat the disgusting p*do-loving, welfare economy demoncrats and their puppet master, BIG PHARMA who has been poisoning all of us for too long.” (Pandemic restrictions and Dr. Anthony Fauci are another of the groups’ common enemies.)

The group included clips to a recent podcast that Black Hammer founder Gazi Kodzo (aka Augustus Romain, Jr.) was on with Proud Boys founder Gavin McInnes. In the clip, the two did appear to agree on some matters.

At one point McInnes noted, “You were there from day one. We say ‘uhuru’ because of you.” (“Uhuru” is Swahili for “freedom.”)

Sharing some enemies and agreeing on a few things isn’t the same as directly working together, however. Further, unless McInnes has rejoined the Proud Boys, he doesn’t have the authority to speak on behalf of the group. He left the Proud Boys in 2018. Enrique Tarrio leads the group now.

The right-wing propaganda factory Gateway Pundit nevertheless covered the purported alliance uncritically. It said the Proud Boys and Black Hammer have “officially formed a coalition” to “fight big pharma and the Democrat establishment.” The outlet got a statement from Black Hammer confirming that it was working with the Proud Boys.

Neither McInnes nor the Proud Boys provided the outlet with any comment.

Many were skeptical that the two groups would work together.

Will Carless, who covers extremism for USA Today, tweeted that McInnes has little influence over the Proud Boys anymore and opined that Tarrio, not McInnnes, has the authority to announce such an alliance. Tarrio is currently in jail on a weapons charge.

People in Proud Boys channels on Telegram reacted with a mixture of shock, horror, and amusement. Some suggested that a good thing about such an alliance is that they couldn’t be called racist for it.

“Oh the Left won’t know what to do with this one!” one laughed.

A few felt that working with the group on their shared goals would make them more effective overall.

Many of the subscribers in Proud Boys channels were appalled, however. Some said outright that they hadn’t formed a coalition with Black Hammer or said that McInnes doesn’t speak for them, anyway. Numerous members used racial and homophobic slurs.

“Teaming up with Black Supremacists is de wei [the way]?” commented one subscriber. “Stop the train.”

While it is possible that this coalition is legitimate, it’s more likely that it’s is little more than a publicity stunt.

Neither McIness nor Black Hammer responded to requests for comment.