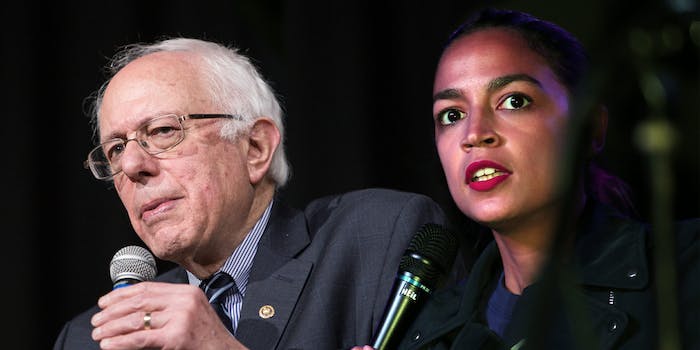 Does the progressive left have a unified foreign policy?

They have a set of ideas, it just needs to be articulated altogether.

As the progressive left in America has grown in strength over the last several years, there have been a number of pieces critiquing progressives on foreign policy. The argument is that while the left has a robust agenda on the domestic front, they are painfully lacking when it comes to international affairs.

They have broad ideals, they argue, like being anti-war and anti-austerity, but few specifics.

If you look closely at the positions of America’s leftwing leaders and the organizations that support them, you will find that there is actually a coherent and thoughtful foreign policy on the left. The problem comes from the tendency to equate “foreign policy” with “war” that leads many in the political establishment to find the left lacking.

The truth is that there is a thoughtful and radical approach to international affairs emerging. The left is just waiting for a figure who can articulate that vision. Politicians like Sen. Bernie Sanders (I-Vt.), state delegate Lee Carter (D-Va.), Rep. Pramila Jayapal (D-Wa.), Rep. Ro Khanna (D-Ca.), and soon to be Rep. Alexandria Ocasio-Cortez (D-N.Y.) already stand for most of the issues outlined below, but they need to sharpen their message and, on a number of issues, ensure that they are on the same page .

We simply haven’t seen the politician with large enough profile who is focused enough on international affairs to deliver the clear message that is emerging in progressive circles. If you take a closer look at the issues, you’ll see that the platform is fully formed there.

It’s a simple position that would be incredibly popular if it were championed by a presidential hopeful. Ending the various wars America is engaged in around the world could be a winning campaign message.

Though no presidential candidates in recent memory have quite been able to campaign on bringing our wars to an end, a number of state and local officials have run successfully on a platform of ending America’s failed, tragic adventures abroad.

Alexandria Ocasio-Cortez ran against the wars in her primary against Joe Crowley in New York’s 14th district. On her issues page, she says that she “believes that we must end the “forever war” by bringing our troops home, and ending the air strikes that perpetuate the cycle of terrorism throughout the world.”

Carter has also actively opposed American bombings in Syria and broad abuse of the AUMF (Authorization for Use of Military Force).

It is true that few elected officials have come out with the same explicitly anti-war stances of Ocasio-Cortez and Carter, but it is also true that only 23 percent of voters believe the United States is winning the war in Afghanistan. Considering there are so few anti-war voices in politics, it seems clear that there is an opening, and leftists are emerging to take advantage of America’s antipathy towards the so-called War on Terror.

Not only should a truly progressive party aim to end the various wars the United States has gotten itself into since 2001, but it would also create a strategic framework that shifts America away from war as its default model for conflict resolution. For example, supporting the Iran Deal and de-escalating Trumps’ bellicose rhetoric towards the country would be a solid step for progressive politics in America.

Polling in 2017 found that 56 percent of Democrats support BDS.

Minnesota Congresswoman Betty McCollum (D) has introduced legislation that would ban Israel from using American aid for “military detention, interrogation, abuse, or ill treatment of Palestinian children,” but it has no chance of going anywhere at the moment. Rising progressive stars like Rep. Ro Khanna (D-Hawaii) and Pramila Jayapal (D-Wa.) are among the 28 co-sponsors the bill.

It is worth noting that a bill aimed at criminalizing BDS proposed last year received more Democratic support than McCollum’s bill. As Israel continues its vicious occupation of Palestine and Saudi Arabia decimates Yemen, there is a chance for a clear moral stand which many Democrats have failed to take.

This trend continues today. In September, it was revealed that the Trump administration had been mulling supporting a coup in Venezuela. In 2017, the New York Times reported, administration officials met with rebel military officers and discussed a plan to overthrow President Nicolas Maduro.

Additionally, sanctions on countries in the region that pose no threat to America persist today. After President Barack Obama began normalizing relations with Cuba, President Trump reversed course, punishing the Cuban economy over old grudges. Sanctions continue in Venezuela over human rights violations, corruption, and electioneering, though many countries the United States is in business with that are worse on all three issues.

Recent Republican presidents have been antagonistic toward institutions like the U.N. and Democratic presidents have often elected to follow rather than lead in international peacekeeping and humanitarian efforts.

One of the most embarrassing moments the United States has experienced on the international stage during the Trump administration was the withdrawal from the Paris Climate Agreement. Trump’s path of antagonistic foreign policy has continued with his threats towards the International Criminal Court’s investigation of war crimes perpetrated by the U.S. in Afghanistan.

While Democrats have generally participated in international efforts to bring peace to the world and to fight massive problems like climate change, a truly leftist foreign policy would exhibit solidarity with other nations, not just lip service. Decreased military spending could help fund such efforts.

Oppose the rise of fascism

As America deals with the alt-right, other countries are seeing a similar rise of right-wing nationalist parties. And while things like regime change and war should be off the table in all but the most extreme circumstances, it is the duty of a functioning left-wing to oppose fascist figures and movements such as Viktor Orban’s government in Hungary and Marie Le Pen’s movement in France. With a burgeoning far-right gaining power in Austria, Ukraine, Italy, and elsewhere, we should expect left-wing politicians to speak out against the groups championing xenophobic and hateful ideas.

Though many progressive politicians in America have solid ideas about foreign policy, they have fallen short in their articulation of an international political vision. It isn’t enough to have good policies. If the left wants to gain real power in America, it will have to demonstrate how these issues combine to form a worldview, one that chooses peace over war, the oppressed over the oppressors, and justice over the status quo.

Just as the American left has used issues like Medicare for All, $15 minimum wage, and equal pay to create a vision of the future of America, ending the wars in the Middle East, adopting a policy of anti-interventionism, and collaborating on pressing humanitarian issues could be stitched into a vision of the world that stands in stark contrast to the status quo of the military industrial complex.