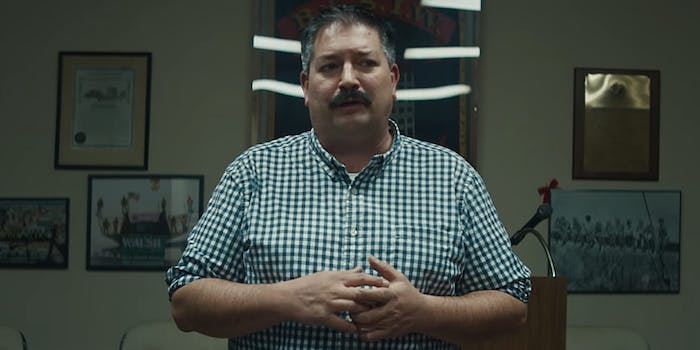 It makes sense, but it's a radical concept.

In the aftermath of President Donald Trump’s election, progressives are looking for new ways to differentiate themselves from your run of the mill establishment Democrats. Many have sought the endorsement of progressive organizations like Our Revolution and the Democratic Socialists of America.

Others have built their campaigns around cornerstone left-wing issues like Medicare for all and a $15 minimum wage. Lately, a new way for progressive candidates to walk the walk has emerged: unionizing campaign staff.

Two prominent progressive congressional candidates have unionized their campaigns in recent weeks. Randy “Ironstache” Bryce—a union ironworker whose attempt to unseat Speaker of the House Paul Ryan (R) in Wisconsin’s 1st District has made national headlines—was the first to announce that his campaign would be unionized. Late last week, Jess King, an energized progressive hopeful in Lancaster, Pennslyvania, announced that her campaign staff has elected to unionize as well.

The organizing effort in Ironstache’s campaign was the brainchild of Nate Rifkin, Bryce’s digital director. Rifkin saw that Bryce, himself a member of Ironworkers Local 8 in Wisconsin and ardent pro-union voice, could further build his credibility with labor if his workers unionized. He also saw the need for campaign staffers, who work notoriously long hours for low pay, to have union protections. Bryce told the Nation that as soon as the idea was brought up he said, “Let’s do this.”

Jess King expects a hotly contested primary in Pennsylvania’s 16th district against centrist Democrat Christina Hartman who has already lost to the Republican incumbent and is the kind of boilerplate Democrat who has a “Supporting Small Businesses” section on her website.

King has been running an incredibly progressive campaign with the help of grassroots group Lancaster Stands Up. As with Bryce, unionizing seems a natural fit for King’s values. Julia Eddy, a King staffer, told the Intercept exactly that:

“Candidates and campaigns preach progressive values, but it can be hard to live those values in our work when campaigns are so short term and uncertain. This union allows us to have the same guarantees as other union workers even in an unorthodox working environment. I’m especially proud of the focus this union has on sexual harassment policies and protecting workers from both harassment and retaliation.”

King and Bryce’s moves are not merely isolated incidents. Since Trump’s election, unions have been on the rise. Trump’s Labor Department immediately went on the offensive against unions, expanding right to work laws, furthering the fight to destroy public sector unions, and otherwise chipping away at labor rights.

Rather than go into a defensive crouch, unions have aggressively expanded into new terrain. Digital publications like Vice and Gizmodo have unionized, as have television writers’ assistants, script coordinators, and graduate students.

Now political operatives are getting in on the action. Resurgent unionizing efforts by groups like Fight for 15, SEIU, and UNITE HERE have made impressive inroads in more traditional union work environments, like hotels and restaurants, and have had a national impact as well.

For their part, the Campaign Workers Guild, the group that represents these workers, views this as just the beginning. Meg Riley, the Vice President of the guild says that her organization is “currently bargaining a few other contracts, and encourag[ing] other campaign workers who are ready to unionize to reach out … For far too long, candidates have sought labor endorsements while mistreating the labor on their own campaigns. Candidates need to practice what they preach by bringing their own labor standards in line with the Democratic platform.”

Since the heyday of Reaganomics, the right has led a campaign aimed at ensuring union decline in America. Today only one in eight workers are represented by a collective bargaining agreement. With workers growing more conscious of their situation under Trump, it seems that this long-standing decay is finally starting to reverse course.

Union representatives understand that one of the most important things they can do in terms of self-preservation is endorse reliable candidates who will protect their interests. They have learned the hard way that just because you have a “D” next to your name doesn’t mean you have the best interests of the labor movement at heart. Look for politicians on the left side of the aisle to keep finding new ways to show their labor bonafides ahead of a contentious 2018 election cycle, as workers continue to demand accountability.

Because what better way to demonstrate your support for unions than helping to build one yourself?