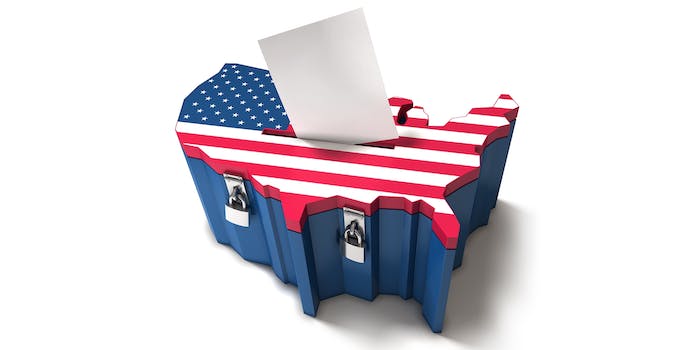 What ballot measures should progressives support on Nov. 6?

Some states could make some interesting changes on Election Day.

Candidates for office get the most attention on election day, but ballot measures often have a meaningful and nearly immediate impact on voters’ lives.

There are some terrible ballot measures across the country this year, including abortion restrictions in Alabama, Oregon, and West Virginia, voter ID laws in several states, and an attempt to set back trans rights in Massachusetts. But there are also a number of inspiring, progressive proposals that will be on Nov. 6 ballots. From the possibility of rent control in California to voting rights for felons in Florida, here are some of the best ballot measures that you can vote on in the midterm elections.

“YES” vote repeals a bill that limits rent control in California. A “YES” on Prop 10 is a “YES” on rent control.

In 1995, California passed a law limiting rent control in the state to buildings constructed after that year. In cities like Los Angeles and San Francisco, where rent is highest, this date was extended back even further. Repealing the bill would allow municipal governments to pass rent control laws as well as vacancy control laws, which means placing limits on how much landlords can raise rents between tenants.

Prop 10 could have nationwide ramifications. In recent years, skyrocketing rents in cities have given rise to tenants unions, groups that advocate for the rights of renters. Prop 10 pits tenants unions against big real estate developers. Success on 10 would be viewed as a victory for the tenants’ movement and might lead to more progressive housing legislation throughout the country.

The attacks on voting rights in America has been well-documented, and rightfully so. The good news is that in some states, people are fighting back. While Amendment 4 would not extend voting rights to every felon (those convicted of murder or sexual offenses will remain disenfranchised and you can’t vote while serving your sentence), an estimated 1.5 million people would regain the right to vote.

Criminal justice reform has become a key issue across the country thanks to organizations like Black Lives Matter. Amendment 4’s passage would be a key piece of a larger movement towards changing the way we think about justice in America. Florida is one of 10 states in which felonies can mean a permanent loss of voting rights.

While many states are better on the issue, only two states (Maine and Vermont) do not restrict voting rights of felons at all and allow inmates to vote from prison.

If Question 2 passes, Nevada will be the 10th state (plus District of Columbia) to pass a bill that exempts feminine hygiene products from sales tax. Bills like this are meant to change society’s understanding of tampons and other feminine hygiene products, reinforcing the fact that they are medically necessary. In their official argument in favor of the measure, proponents of Question 2 wrote, “These products are not a luxury but a basic necessity of life.”

This argument has gained more traction in other countries than in the United States. Scotland became the second country to make feminine hygiene products totally free in 2017 (Cuba has been doing it for decades). Left-wing writers like Delete Your Account’s Roqayah Chamseddine and organizations like Free the Tampons have tried to make free tampons a global progressive issue. If more states pass initiatives like Question 2, perhaps a future where these products are free could become possible.

“YES” vote on 127 requires electric utilities in Arizona to reach 50% renewable energy by 2030.

Following the release of an apocalyptic report on climate change from the UN earlier this month, there was a general cry of helplessness from progressives in media and online. Massive environmental impact is coming and given America’s conservative government, there is not much we can do about it.

Two state ballot measures are challenging that assessment. In Washington, Initiative 1631 would impose a tax on carbon emissions. The revenue, which is estimated to be around $1 billion a year, would be used to fund clean-energy projects and fight the effects of climate change. This tax would increase by $2 annually until greenhouse gas reduction goals are met.

Proposition 127 would hold Arizona’s energy companies accountable for pollution and demand change. Proponents of the measure estimate that not only would the bill help curb emissions, but it would also be a long-term, money-saving measure. Since researchers have found that corporations are responsible for the vast majority of climate change, policies targeting them are a good next step.

America is by no means a leader in climate change. Measures like this don’t go far enough to stem the tide of global warming, but they are a constructive start that could serve as a model for the rest of the country.

The United States has the highest incarceration rate of any country. The War on Drugs has played no small role in America’s earning this unfortunate title. Criminal justice reformers across the country are fighting to decriminalize drug offenses in hopes of making meaningful progress on the path to prison reform. Issue 1 is just the sort of legislation reformers hope to use to change the prison industrial complex.

Issue 1 also has some other provisions along the same lines. The rules of probation would become more lenient and inmates who earn “credits” could see their sentences reduced. Also, the money saved by reducing the prison population would be reinvested into drug treatment and recovery programs if the measure passes.

“YES” vote limits how many patients can be assigned to each registered nurse in Massachusetts hospitals.

In an election when big healthcare issues like Medicaid expansion and pre-existing conditions are in the conversation, a measure like this might seem inconsequential. The reality couldn’t be further from the truth.

A simple proposal like Question 1 can go a long way to reaffirm a state’s commitment to patients and workers. Focusing on providing better care for patients is a way to pave the way for larger goals like universal healthcare. Also, labor unions like UNITE HERE have joined nurses unions in supporting the measure.