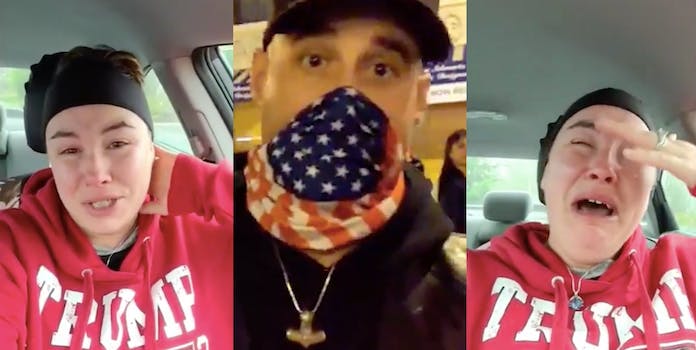 'Antifa should not be winning. They will ruin your life.'

A pro-Trump councilwoman from Washington went viral after filming herself sobbing and blaming “antifa” after her husband was fired from his job for harassing a reporter at the “Million MAGA March” in Washington, D.C.

Michelle Dawson, a councilwoman in Yacolt, Washington, uploaded her teary-eyed, 17-minute rant to Facebook. In the since-deleted video (saved here for posterity), Dawson addresses the actions of her husband. Jeremy Dawson lost his job as a construction foreman after physically confronting reporter Laura Jedeed at the Million MAGA March.

Rather than disavow her husband’s behavior, however, Michelle Dawson blames “antifa” for the controversy and accuses her husband’s former employer of “bend[ing] their knee to terrorism.”

On Sunday, Twitter meme account @JaredPushner shared a video that intercut Dawson’s tearful Facebook rant with footage of her husband from the Million MAGA March. The video has been viewed more than 300,000 times on Twitter and migrated to the r/PublicFreakout subreddit where it has earned a whopping 43,000 upvotes in less than a day.

The video begins with Dawson—filming from her car and donning a red Trump sweatshirt—saying to the camera, “The video that was made is probably not my husband’s best moment.”

The video then cuts to Jeremy Dawson sporting an American flag bandana and asking Jedeed, “What’s up? How you doing, bitch?”

“What he did, I’m not gonna say is not OK. Shit happens,” Dawson says. After a quick shot of protesters calling attention to the “Portland antifa press” at the Million MAGA March, the video returns to Dawson, who is now crying as she says, “The company that Jeremy worked six years for and worked his ass off for bent their knee to terrorists yesterday and fired him.”

At this point, viewers get a longer glimpse of Dawson’s husband, as he gets in Jedeed’s face and repeatedly asks, “What’s up bitch, how you doing?” Jedeed asks Jeremy Dawson not to step on her foot or touch her; he responds by insisting that he’s not touching her, calling her a “maggot-ass,” and demanding that she stop filming him.

This back-and-forth continues for several more rounds. Speaking from her car, Michelle Dawson grows increasingly hysterical, saying through tears, “Antifa should not be winning. They will ruin your life. It’s being turned into such an ugly thing.”

Meanwhile, Jeremy Dawson continues to threaten Jedeed on the street, at one point telling her, “I can’t wait to see you in the fucking lobby again,” and later accusing her of being on meth.

Michelle Dawson tells viewers, “I think the world needs to see the raw emotion of what antifa causes.” She says she doesn’t even want to get out of her car and wishes her mom would “come to my car right now and hug me.”

“At this point, I don’t care if somebody’s like, ‘Oh, you’re a councilwoman. You shouldn’t be doing this shit that you’re doing.’ Because you know what? I’m just kind of done with everything at this point,” Dawson says at the end of @JaredPushner’s video.

u/am4013 made an astute observation: “Im not seeing the liberal tears the right has been promising mostly a lot of right wing cry babies claiming to be victim as usual.”

Jedeed, who has been attending and reporting on far-right rallies since 2017, tells the Daily Dot the feedback to the video mashup has been great and that Dawson’s behavior is not an isolated incident.

“I’m glad that I was able to capture how the far-right acts when they think they have all the power, and the way they try to twist the narrative to make themselves perpetual victims,” she says. “The video mashup did such a great job of showing the deep hypocrisy of the far right. When they say ‘fuck your feelings’ they mean ‘fuck YOUR feelings’—their feelings remain valid, their enemies’ feelings are not. … This whole incident is a great illustration of how the far-right operates and I’m glad it’s broken into the mainstream consciousness.”

Update 2:30pm CT, Dec. 1: This story has been updated with a quote from Jedeed.