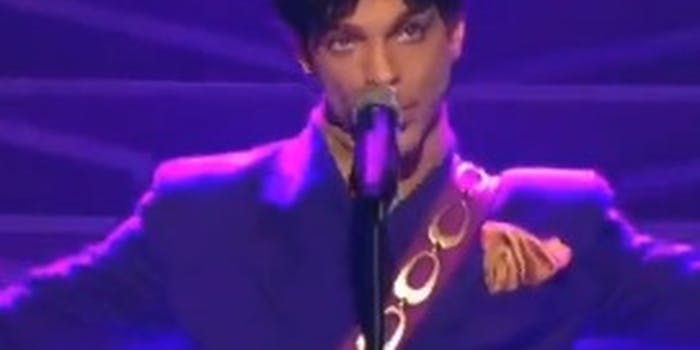 When Prince slaps you with a takedown request, you listen

Prince hit Twitter with a takedown request after some of his music appeared on the company's video-sharing community Vine.

Prince slapped Twitter with a takedown request after some of his music appeared on the company’s video-sharing community Vine.

The March 22 request claimed eight Vines contained “unauthorized recordings.” It demanded their immediate removal, along with “all other occurrences on the vine.co platform.” It didn’t take a million days for the clips to apparently disappear, as the links included in the notice don’t lead to playable Vines any longer.

As Twitter told The Next Web, it’s not the first Vine takedown request it’s received and it follows the same process for content removal on Vine as it does on Twitter.

For someone like Prince, to whom control over his music and legacy is almost paramount, it’s vital to keep track of potential copyright violations. That said, going after Vine, where videos are just six seconds long, seems excessive.

Prince’s songs are often complex works and you can’t really get a sense of his full tracks in six seconds, especially if the videos in question are full of choppy edits. No one’s going to enjoy a loop of a “Purple Rain” snippet ad infinitum in the same way they would the full song. If anything, you’d think that Vines would act as a teaser for his music, encouraging viners to step out and pick up some of his records.

It wouldn’t be surprising if, deep down, Prince wants the Internet to party like it’s 1999: fewer copyright violations in video-sharing apps, more GeoCities GIFs.