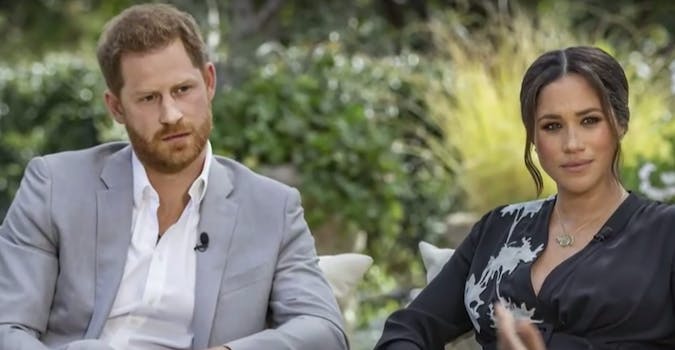 Is Prince Harry a ‘simp’ for choosing his wife’s happiness?

The right seems to think so.

Not too many men logging into Twitter dot com this morning have served in Afghanistan and married a Hollywood actress (to say nothing of being born into an echelon of literally unobtainable class and wealth), but they found themselves miffed at Prince Harry after he and his wife Meghan Markle sat down with Oprah to discuss why they left the royal family.

The couple described the racism they faced from the British royal family, which factored into their decision to leave behind the monarchy, shed their titles, and live as (relatively) normal citizens.

No matter how you look at it, it’s an agonizing decision. Remain with your family out of a sense of loyalty to its history and your country, despite the fact they have ostracized you for marriage; or renounce your title to the most prestigious crown still remaining in the world and risk the wrath of all of England.

It’s arguably much, much, much hard to do the latter. But for a lot of men and (some women) online—particularly conservative ones—Harry’s decision to do so wasn’t actually a choice at all. They think it was all Markle. And because Harry supposedly acquiesced to that, instead of holding firm, he becomes the worst thing a man can be: a simp.

Harry was a sucker who chose a woman over a family, a woman over money, a woman over royalty. And all the right-wing pundits online wanted you to know they would have done it differently. Been more manly about it, that is.

Right-wing troll Jack Posobiec, who has a dubious understanding of monarchial succession (Harry would need to kill his brother to ascend to the throne (which, hey, maybe is an alpha move), claimed Harry chose to be a simp instead of a king.

He was called a “prince who has compromised his legacy for a lady.”

Other wondered if perhaps he was the biggest simp of “all time.”

Almost all of them declared Harry a cautionary tale for choosing his own path. Although they don’t know how he feels, they believe he made the cardinal sin of choosing his wife’s happiness over his own.

Which just goes to show how well they might do in a marriage themselves.