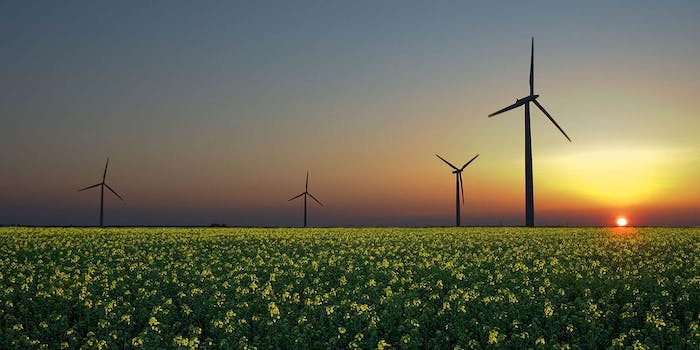 The new report reveals that investment in green technology can help save companies billions.

One of the most common arguments made against corporations taking steps to be more energy efficient is that going green simply costs too much money. By reducing its carbon footprint, a big company might be able to help stave off global temperatures from rising 100 years in the future, but it may also result in its shareholders taking a loss next quarter.

However, new report by the corporate sustainability nonprofit Ceres, created in conjunction with a handful of groups like the World Wide Fund for Nature, argues precisely the opposite: utilizing green technology is often great for a company’s bottom line.

The report, titled ‟Power Forward 2.0: How American Companies Are Setting Clean Energy Targets and Capturing Greater Business Value,” analyzed publicly available information, ranging from corporate social responsibility reports to responses to a survey conducted by the Carbon Disclosure Project, from Fortune 500 companies to determine just what the effects of green energy polices were on those companies bottom lines.

The report found that the 53 companies on the Fortune 100 list that reported numbers netted $1.1 billion in savings from their emissions reduction and renewable energy efforts.

Possibly the most surprising finding in the report is that green investments often show returns quickly—meaning that corporate leaders concerned about short-term profits may not have to sacrifice. ‟Many of these projects achieve significant financial returns within short- and medium-term time frames,” the report reads, ‟with some achieving profitability within one to three years.”

Globally, these efforts quickly showing even bigger cost savings. The report noted that retail behemoth Walmart expects to save about $1 billion per year through its energy efficiency programs and computer manufacturer IBM is getting around half that.

The breakdown of which sorts of companies have a tendency to implement alternative and green energy programs isn’t necessarily even.

Larger companies, far example, are far more likely to have green energy targets in place than smaller ones. 60 percent of all Fortune 100 companies had publicly stated targets. However, when the view shifts to companies in the Fortune 250-500 range, only 30 percent have similar programs in place.

There is also significant divergence by industry.

Fortune 500 companies in the consumer staples industry (food, beverage, household items, etc.) were the most likely to have targets in places, while financial and energy companies tended to do the worst in this regard. 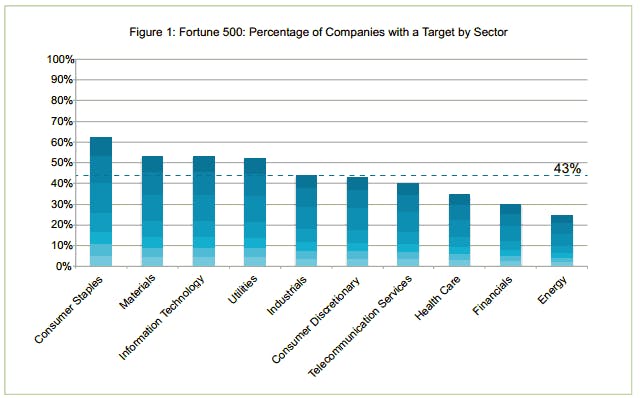 The report speculates why it has been particularity difficult for the vast majority of energy firms to take even cursory steps toward reducing overall carbon emissions:

Despite persistent advocacy by investors on their own and through groups…the Energy sector is consistently resistant to committing to specific reduction. The most likely reasons for this include the increasing demand for and the increasing carbon content of fossil fuels, and the perceived complexities involved in setting enterprise-level targets that apply to operations that span continents and employ a wide variety of technologies and processes.

The report recommended companies identify and support laws that remove barriers to expanding green energy. ‟All companies should be engaged in policy advocacy because it helps increase availability of renewable energy and lower prices, while bringing corporate commitments and public policy positions in line with one another,” the authors argued, pushing for similar advocacy from investors to push companies to pursue these projects.

Photo via Para/Wikimedia Commons (CC BY 2.0)