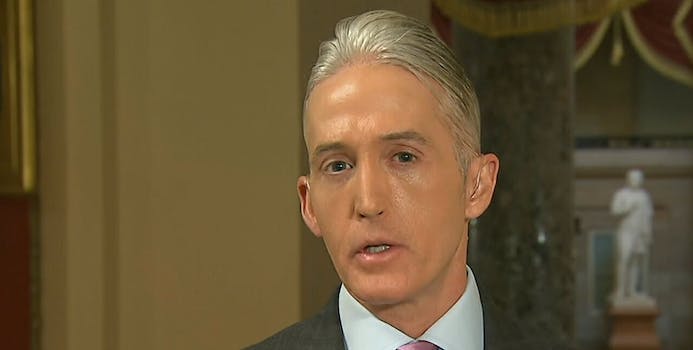 Trey Gowdy said 'the chronology is not favorable for the White House.'

House Oversight Committee Chairman Rep. Trey Gowdy (R-S.C.) said his committee is investigating the White House’s handling of Rob Porter, who resigned last week amid allegations that he had committed domestic abuse against his ex-wives.

Porter’s resignation has been scrutinized as details of his background check being delivered to the White House have come into question. On Tuesday FBI Director Christopher Wray seemed to contradict the White House’s timeline of their knowledge of Porter’s alleged domestic violence, noting that President Donald Trump‘s administration should have known about them months ago.

On Wednesday Gowdy, who recently announced he would not seek reelection later this year, told CNN co-anchor Alisyn Camerota that he was “troubled by almost every aspect” of Porter’s time at the White House.

“We are directing inquiries to people that we think have access to information we don’t have. You can call it official. You can call it unofficial. Those words don’t mean anything to me. What means something to me is I’m going to direct questions to the FBI that I expect them to answer,” Gowdy said, later adding: “I spent two decades believing women and children who alleged abuse, even sometimes when no one else did… I have real questions about how someone like this could be considered for employment… How do you have any job if you have credible allegations of domestic abuse? Again, I am biased toward the victim.”

Republican Rep. Trey Gowdy on allegations of spousal abuse against former top White House aide Rob Porter: “How in the hell was he still employed… How do you have any job if you have credible allegations of domestic abuse?” https://t.co/vuNO7b7riO https://t.co/nHySCCvUGb

Gowdy added: “The chronology is not favorable for the White House.”

Earlier reports from the news outlet suggested several high-level White House officials knew for “months” about the allegations against Porter despite “serious talks” taking place about promoting the staff secretary.

Trump has defended Porter following his resignation. Last week the president tweeted that people’s lives were being “shattered” by a “mere allegation,” and when speaking with reporters he said it was “important” to remember that the staff secretary denies the allegations.