The video is strange and terrible. And that's just the beginning.

The video is the sole upload of an account called Protect Internet Freedom, created Wednesday. It cites a website, protectinternetfreedom.com, which makes its intentions clear: “The FCC’s move to oversee the Internet the same way they do landline phones will cost consumers more money and stifle the innovations that only a free Internet make possible.”

That’s a reference to the fact the the chair of the FCC, Tom Wheeler, announced Wednesday that he’ll move to reclassify the Internet under Title II of the Communications Act. It’s an explicit attempt to protect net neutrality (the principle that all Internet data be treated equally) by preventing Internet service providers (ISPs) from charging certain websites extra to run at full speed, and is widely regarded by Internet freedom advocacy groups as an unqualified victory.

To be clear, there’s absolutely no reason to think that net neutrality means that “the government” will suddenly begin monitoring your every move on the Internet. And Chairman Wheeler’s proposal “is not going to change your Internet experience in any significant way, and that’s a good thing,” Tim Karr, Senior Director of Strategy at the Internet freedom advocacy group Free Press, told the Daily Dot. “We’re protecting consumers against monopoly-minded Internet access providers.”

“There are assurances now [that ISPs] won’t be degrading your connection,” Karr added. “I don’t think it will be even reflected in the cost that you’ll pay—because there has been some suggestion that Title II will be an extraordinary tax burden for Internet users, but a lot of that analysis has been proven wrong.” 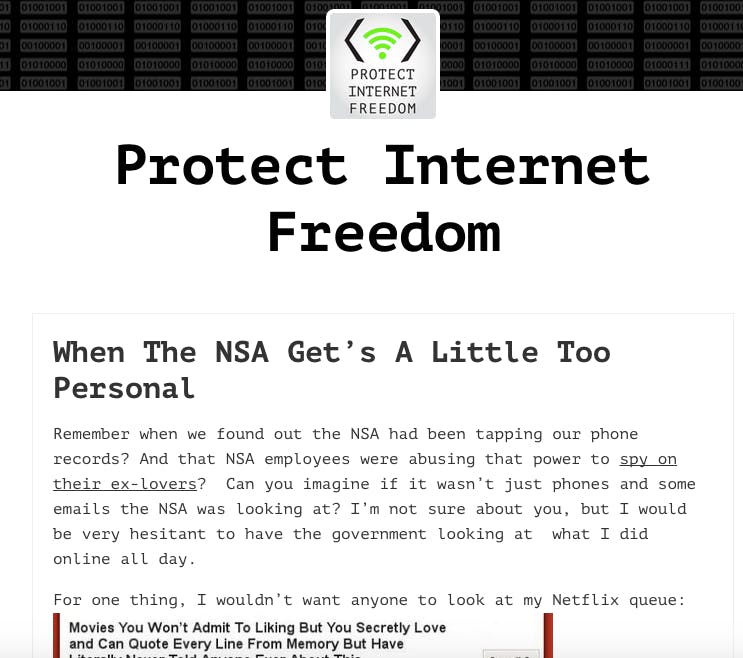 Anyone with the most cursory knowledge of these topics knows that the National Security Agency’s significant surveillance capabilities have nothing to do with the FCC’s attempt to preserve net neutrality.

Nevertheless, PIF seems to contend that, because the NSA collects Americans’ phone metadata, the FCC regulating ISP treatment of Internet connections means it will “monitor what people can do and say” online—a notion that completely distorts both the authority of the FCC—the Commission can’t spy on you—and the nature of Wheeler’s proposal. 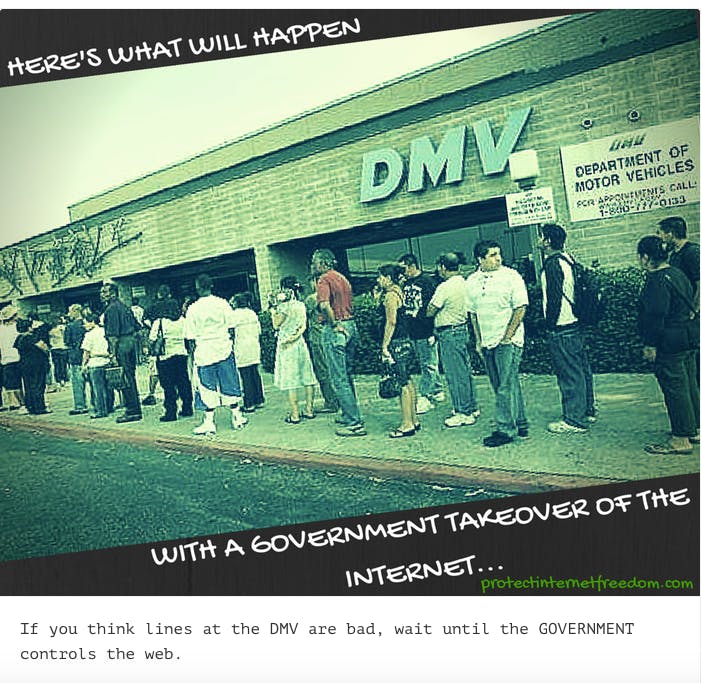 Others, like the message in the image above, belie such slipshod opinions—governments do control the Web, in some senses; ICANN, a coalition of world governments, manages the Internet’s domain name system, for example—that it indicates the work of a child’s prank. It should go without saying, but net neutrality wouldn’t slow users’ speeds down, nor would it force them to wait outside to use the Internet. 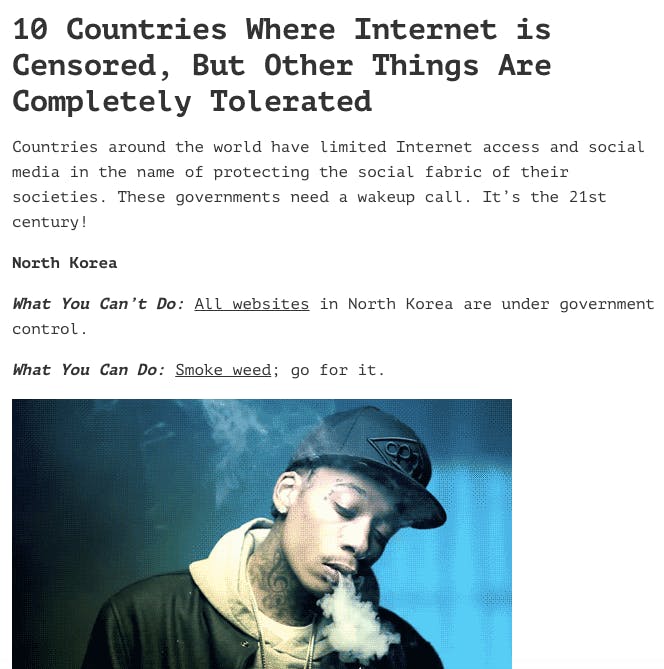 Again, in no way would net neutrality prevent anyone from visiting any website—quite the opposite. It only prevents ISPs from selectively charging websites’ access or censoring lawful content. It also has absolutely nothing to do with marijuana. 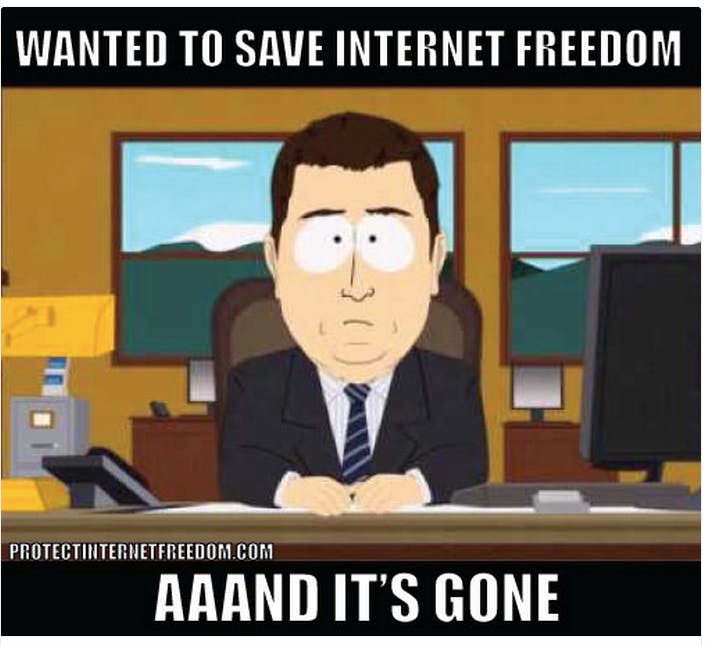 Responding to an emailed inquiry from the Daily Dot to the webmaster behind Protect Internet Freedom, a man identifying himself as Jordan Gehrke claimed the campaign was founded by himself and Ethan Eilon, and that they had no affiliation with any Internet service provider (ISP) or industry group. While that may be directly true, Gehrke is a senior adviser to freshman Tea Party Senator Ben Sasse (R-Neb.), himself an outspoken net neutrality opponent.

It’s worth noting that according to lobbyist watchdog service Open Secrets, the single largest donor to Sasse’s election campaign was the Super PAC Club For Growth. On Nov. 10, the day President Obama publicly urged the FCC to reclassify the Internet, Club For Growth announced that it was vehemently opposed to net neutrality.

In a recent email blast obtained by Business Insider, Sasse suggests net neutrality would put “Putin and Obama in charge of the Internet.” As was the case in November, when Sen. Ted Cruz (R-Texas) called it “Obamacare for the Internet,” referring to net neutrality as Russian President Vladimir Putin taking over the Internet is not only literally nonsensical, it’s so demonstratively wrong that it suggests its the speaker lacks understanding of these issues.

Still, Gehrke says that Sasse has no hand in PIF, though he does have a dog in the fight.

“PIF is in no way under Sen. Sasse’s direction,” Gehrke said. “He wrote a letter on behalf of the group because he agrees with the mission. That’s it.”

As of this writing, Gehrke claims PIF has 170,000 signatures of people who are opposed to reclassification—a significant number, though it pales in comparison to the more than 4 million who wrote to the FCC in 2014, the overwhelming majority of whom were net neutrality supporters. Alas for Sasse and Gehrke, it’s likely for naught: the wheels are in motion for the FCC to vote to reclassify on Feb. 26, experts feel the FCC is well insulated from lawsuit, and Obama would likely veto any bill to kill net neutrality. 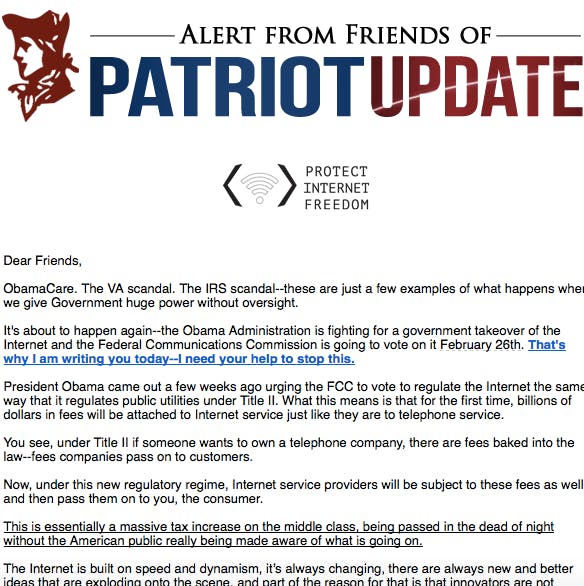