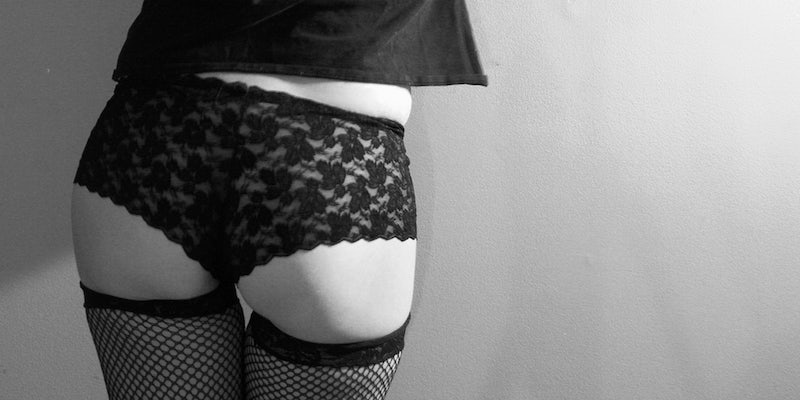 A place where sideboob is the tamest thing you'll see.

While there are some photos on Instagram that could be classified as breaches of morality and good taste—think hot dog leg or funeral selfies—none of the images on Instagram actually qualify as pornographic. But like most social sharing platforms, Instagram restricts nudity and sexually explicit content, so if you ever want to post your best sepia-tinted NSFW pic, you’re unfortunately out of luck.

A French Web developer, Lechemia launched Pornostagram last July to fill what he sees as Instagram users’ demand to post and share their own naughty pics on a non-judgmental, non-restrictive platform. With more than 10,000 members and an average of 53,600 monthly unique visitors, Pornostagram is small, but growing: It’s been touted as Europe’s most popular adult social network, and has received coverage in French Vice and Gizmodo.

“With my different girlfriends we used to send sexy text[s] and pics to each other and I noticed that in a way or another, no matter your age or gender, you’re always a bit ashamed to do so,” Lechemia told the Daily Dot via email. “And I thought maybe to allow people to upload pics to an app and to apply filters to them could lessen the shame felt.”

It’s also debatable whether Instagram users are actually all that interested in sharing sexy pictures of themselves. Pornostagram marketing director Romy Roynard says that while she doesn’t expect Instagram devotees to gravitate to the platform, “we simply think users should be able to post and share nude pics or sexually explicit content if they want to. By creating this app, we’ve finally given this choice to the users.”

Yet few have managed to find a significant audience (though it should be mentioned Pornostagram has seen impressive usership), in part due to the obvious social stigma attached to sharing one’s pornographic tastes in a social media setting, and in part due to the tech community’s resistance to platforms like Pornostagram, which welcome sexually explicit user-generated content.

“I applaud Pornostagram for what they’re trying to do, but I think it’s a huge shame there has to be a Pornostagram in the first place,” Gallop says. “What they’re doing should be accepted on Instagram, because it’s a huge compliment to any social media community when that community feels comfortable enough to explore and self-identify sexually.”