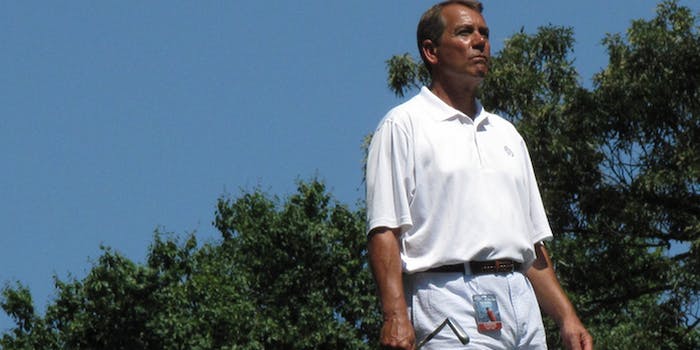 As if anyone ever found Congress arousing.

House Speaker John Boehner’s name has been a source of giggles on the political left for years, but it was a fellow Republican who made the most of it: J.D. Winteregg, a self-described Christian conservative millennial challenging Boehner in a primary fight for Ohio’s 8th congressional district, has released an attack ad that’s 100 percent dick jokes.

The Tea Party candidate’s ultra-low-budget spot is technically an indictment of a lifetime Washington insider golfing with the enemy (Barack Obama). But, first and foremost, it’s a painful spoof of Cialis and Viagra commercials that would have seemed outdated 15 years ago.

“Signs of electile dysfunction,” a friendly voice informs us, “include extreme skin discoloration” and “the inability to punch oneself out of a wet paper bag.”

Our solution is Winteregg himself, of course—the ideological aphrodisiac that guarantees secured borders, robust gun rights, and a gutted Planned Parenthood. If these metaphors don’t seem hopelessly mixed already, just wait for the tagline about “a Boehner lasting longer than 23 years.” Surely, it would be simpler to just call him a big orange penis?

Boehner remains sanguine on his reelection odds, but recently dropped $125,000 on a two-week primary ad blitz to solidify support. Following this sophomoric stunt, however, he’s sure to get revenge in like fashion. And if the name “Winteregg” isn’t enough to work with, well, his opponent also teaches French. Sometimes at the college level. That’s like the holy grail of effete, anti-American elitism! The slurs practically write themselves.