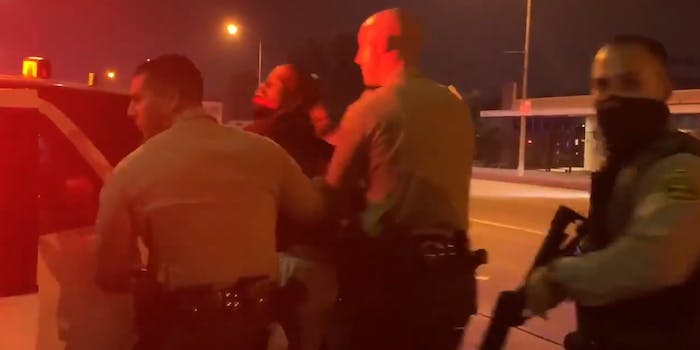 First Amendment advocates are sounding alarms over a reporter’s arrest during a protest in the Los Angeles area this weekend. Many are also criticizing police for lying about what happened.

On Saturday night, Josie Huang, a reporter with NPR affiliate KPCC, covered a press conference in front of the hospital where two Los Angeles County Sheriff’s Department (LASD) deputies were being treated.

Police say the deputies were “ambushed” by an unknown assailant while sitting in their patrol car earlier that evening. Both are expected to survive, though it isn’t yet known whether they will be permanently impacted by their injuries.

After the press conference, a small but heated protest erupted in front of the hospital. Several taunted officers standing guard.

Police ordered protesters, who they said were blocking the hospital entrance, to disperse. According to Huang, as the men obeyed, she saw police follow one down the street. She followed to capture his arrest on video.

As she approached, still filming, police abruptly turned their attention to Huang. Footage shows an officer ordering her to back up, then she is quickly grabbed, thrown to the ground, and arrested. All the while, Huang screams for help and shouts that she’s with the media, repeating “KPCC” over and over.

Officers paid her no heed. Huang was arrested and charged with misdemeanor obstruction. Penalties include up to a year in jail and $1,000 fine.

Hours later, while Huang may have still been in police custody, LASD released a statement falsely claiming that she hadn’t identified herself as a member of press. It also claimed that she didn’t have “proper press credentials.”

Videos of her arrest tell a markedly different tale.

In them, Huang can clearly be heard yelling that she’s a reporter. Her press credentials are also visibly dangling around her neck in the footage as police throw her against a patrol car, to the ground, and violently arrest her.

Now people are calling out LASD for lying and infringing on freedom of the press.

“You might want to look at the EVIDENCE,” tweeted actress Patricia Arquette.

Several have pointed out that, legally, there is no such thing as “proper press credentials,” as LASD claims.

While LASD is among the numerous agencies that issue press credentials, it is irrelevant whether Huang was carrying one. Government agencies don’t have the right to determine who is and isn’t a reporter in a public seteting

“LASD and LAPD do issue credential badges that help smooth transactions with journalists,” tweeted reporter Kyle Stokes. “But that doesn’t make anyone without these badges any less of a journalist. Whether she was wearing @LASDHQ credentials or not *does *not *matter.”

In a statement, NPR’s senior vice president of news said the organization is “appalled” by Huang’s arrest.

“The rights of journalists are protected by the First Amendment, and essential to an informed public and our Democracy,” Nancy Barnes said, according to NPR.

LASD has since retweeted a captain of a local station saying that it is now investigating the incident and will not provide further comment at this time.