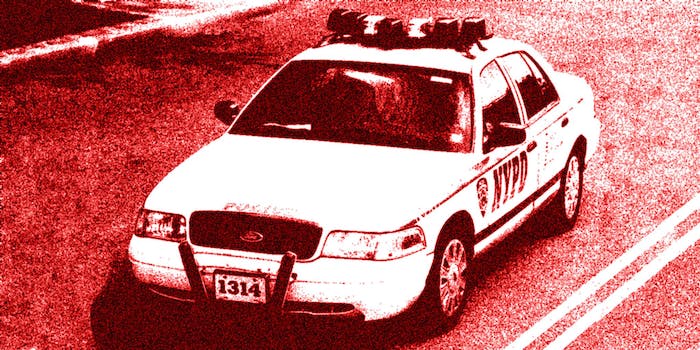 A protest against police brutality ends in Mayor De Blasio upset over NYPD being abused by protestors.

Rallying under the hashtag #ShutDownA14—a nod to the protest’s date—protesters met in New York City’s Union Square and marched south, part of a cross-country effort organized by the Stop Mass Incarceration Network. Cofounded by Cornell West, the organization seeks to “accelerate the movement to stop the injustice of mass incarceration and police brutality; and the racially biased policies and practices of the police, the courts and the U.S. legal system; and to support prisoners’ human rights, and of the formerly incarcerated.”

Citizens outraged at the rash of black men killed by police officers in recent months began their demonstration by reading a list of names of people killed by police. One boy wore a board displaying their photos.

West walked at the head of the march through Manhattan.

The march against police murder makes its way down Broadway. Cornel West in center. #ShutDownA14 pic.twitter.com/VFhIgz7x39

Meanwhile, in other cities across the country, similar demonstrations were simultaneously underway.

On the other coast, in Oakland, protestors stormed their city council.

But tensions were much higher in New York. The event turned ugly when police attempted to block protesters from marching over the Brooklyn Bridge. Some protesters took to pedestrians walkways, but others demonstrators marched in the middle of traffic.

When marches blocked an oncoming motorist who happened to be an off-duty officer, an altercation ensued.

Upset, he exited his vehicle and engaged in a verbal altercation with protestors that ended in the off-duty police officer being punched in the face, at which point he purportedly pulled his gun and pointed it at other peaceful protesters.

Tensions escalated and scuffles broke out.

One woman reportedly fell onto a railing and was hospitalized with broken ribs.

The New York City Police Department arrested as many as 42 people, according to Gothamist.

Though the NYPD press office said none of the journalists who were arrested were charged, even media with proper press passes were prevented from performing their duty and reportedly detained.

An NYPD spokesperson said that in addition to the off-duty officer who was punched in the face after exiting his vehicle to engage in a verbal altercation with protestors, another officer injured his knee while attempting to arrest someone.

Reports this evening that two of our NYPD officers were assaulted by protestors reminds us that here in New York City, violence or threats of violence against the police are unacceptable and will absolutely not be tolerated. These attacks will be thoroughly investigated, and we will urge the full prosecution of the perpetrators. And any other person who might use the right to peaceful protest as cover to initiate violence, cause mayhem or incite disorder – whether against the police, the people or property of our great City – should consider themselves on notice that New York City will not stand for it. Anyone who decides foolishly to engage in such destructive acts can expect a swift arrest and aggressive prosecution. As I have said before, such activity is beneath the dignity of New York City.

In response, the Stop Massive Incarceration Network issued a statement accusing the mayor and media of “outrageous lies” and calling for another protest outside city Hall next Thursday.