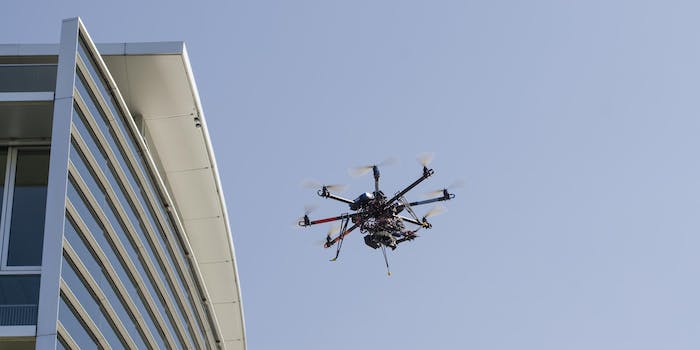 Owner arrested after his drone gets too close to police helicopter

Don't fly so close to me.

A Los Angeles-area man apparently learned nothing from Icarus. He flew too close to the sun—or in this case, he flew his drone too close to a police helicopter. Now he’s facing criminal charges.

According to a statement issued on Tuesday from the office of Los Angeles City Attorney Mike Feuer, the drone pilot has been charged with “two counts of obstructing a peace officer in the lawful performance of his duties.” If convicted, the suspect could face up to one year in jail and $1,000 in fines.

Martin Sheldon, 57, was operating the unmanned aircraft from a parking lot along Sunset Boulevard while a police helicopter was circling overhead. Police on the ground were in search of a suspect in possession of a deadly weapon and the helicopter was aiding in that search.

Because Sheldon’s drone encroached within the airspace of the police vehicle, the helicopter had to “make an evasive move” and discontinue its search for the criminal suspect below.

“Using a drone to interfere with a police investigation places our officers and the public at serious risk,” said Feuer in a statement. “My office will hold those who recklessly operate these devices accountable for their actions.”

This is just the latest in the ongoing saga of California’s drone woes. Hobbyists have made a habit of flying the vehicles in places that prove problematic for other aircraft.

The presence of drones delayed an effort to contain a wildfire as it approached a Southern California highway in July. The state of California began offering rewards to anyone who could help track down the operators who interfered with the fire-containment efforts.

Sheldon, who was apprehended and had his drone confiscated, is scheduled for arraignment for Oct. 26.