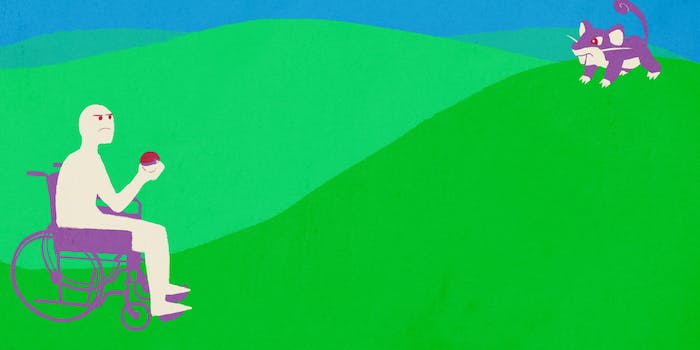 How Pokémon Go is creating a barrier for gamers with disabilities

Not everyone can fully take part in the cultural phenomenon.

There is no viral phenomenon that’s brought people together quite like Pokémon Go. The augmented reality gaming app has taken the internet and world by storm, as people are desperate to catch and collect the characters, making friends and getting fit along the way.

The game is appealing to virtually everyone, but it’s simply not accessible for some players. Pokémon Go is limiting for people with physical disabilities, and the physical requirements needed to play the game—like moving around the environment to collect Pokémon, and walking a certain distance to hatch eggs—make it hard or impossible for some people to play.

Accessibility issues were raised in a thread on Tumblr describing the app’s excluding elements. For instance, Alyx, who uses a wheelchair, said she could not access a Pokémon on the top of a rocky hill.

Diane Murray, editor of Spoonie Living, a blog for the chronically ill, said she anticipates people who have fewer opportunities to go out will run into difficulties getting involved in gyms, and that the app’s requirements to move around to collect Pokémon are problematic for people with physical impairments.

“I also suspect there are a bunch of folks with lower coordination who are frustrated with the way Pokémon are caught, since it requires a fairly precise throw,” Murray said in an email. “[And] those who deal with derealization or disassociation may find the VR mode a bit jarring or triggering.”

You can turn off the augmented reality feature by toggling the setting at the top right of the screen when catching a Pokémon. Turning off AR mode may make people feel more comfortable with the app, and it could also be something to consider to protect your own, and private properties’, privacy.

Murray says the egg-hatching feature is the most problematic, as it requires players to wrack up mileage in order to hatch their eggs. However, tricks like driving slowly in a car with a passenger controlling gameplay and taping phones to ceiling fans are fulfilling the distance goals.

Pokémon Go is based on Ingress, an immersive exploration AR game created by Niantic, the company behind the viral Pokémon hit. Both games are fundamentally activity-oriented, a benefit for people trying to workout more, but restrictive for people with disabilities. Murray offered some suggestions on how the company could address the program to make it more accessible for a greater number of players.

“For Pokémon Go specifically, it would be great if there were alternate play modes that didn’t require so much movement, but also didn’t break the game’s balance,” Murray said. “One I can think of off the top of my head would be an integration with Google Street View that would allow players to take a virtual walk to look for Pokémon and hit up Pokestops and gyms. This could tie into the egg-hatching problem, as well, with miles ‘walked’ in Street View being treated as miles walked in real life.”

Steve Spohn, COO at the AbleGamers charity and advocacy organization, said compared to other mobile games, Pokémon Go excludes disabled players to a significant degree. There’s no reason, he said, why the company couldn’t have included a feature that would let people with limited mobility navigate the game.

Nintendo has other titles and hardware that can exclude disabled individuals, including not providing options to turn off motion control in some games, he said.

A 2008 study showed that one in five casual gamers had a physical, mental, or developmental disability, and three-quarters of study participants described their disabilities as “moderate” or “severe.”

The exclusivity of a game as high-profile and popular as Pokémon Go could bring greater awareness of limited mobile gaming options for people with disabilities. And it’s not just movement impairment that can be problematic for gameplay in games that don’t consider accessibility options, but also hearing and vision impairments. Pokémon Go doesn’t utilize the VoiceOver feature on iPhone, for instance.

“Pokémon Go is unusual as a game that asks you to walk around. Most games have no change if the user is bound to wheelchair,” Fortugno said in an email. “However, mobile games are almost always about precision swiping or tapping, so impairment in motor control would make almost any mobile game hard. It’s difficult to imagine someone with severe Parkinson’s disease playing anything on a small screen of an iPhone.”

One user on the Tumblr thread suggested petitioning the company to include a “disability setting” within the app to provide more diverse options for gamers. The Daily Dot reached out to Niantic regarding the accessibility of the app and did not hear back by the time of publication.

Pokémon Go has achieved an incomparable level of viral success. And when an app, service, or game becomes a watershed phenomenon, it’s even more important to include accessible options so everyone who wants to participate in the pop culture zeitgeist has equal opportunities to do so.