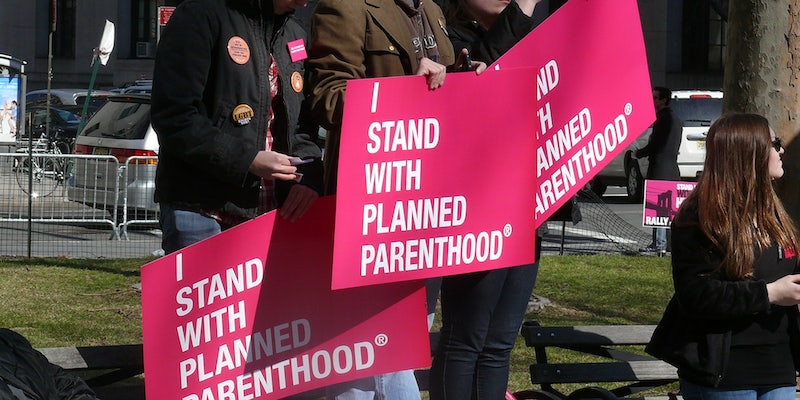 The grand jury also declined to file any charges against Planned Parenthood.

A Texas grand jury, tasked with investigating allegations of misconduct against Planned Parenthood, has instead indicted two anti-abortion activists behind a series of videos designed to discredit the women’s health organization.

The Houston-based grand jury declined to take any action against Planned Parenthood. The nonprofit organization came under investigation by more than a dozen federal and state authorities following release of the videos, which promoted allegations that the organization profited from the sale of fetal tissue.

“When they couldn’t find any improper or illegal activity, they made it up.”

Daleiden faces an additional indictment for “prohibition of the purchase and sale of human organs,” a class-A misdemeanor, a spokesperson for the D.A.’s office said.

“We were called upon to investigate allegations of criminal conduct by Planned Parenthood Gulf Coast,” said Devon Anderson, Harris County’s district attorney. “As I stated at the outset of this investigation, we must go where the evidence leads us. All the evidence uncovered in the course of this investigation was presented to the grand jury. I respect their decision on this difficult case.”

Planned Parenthood filed a civil lawsuit against Daleiden earlier this month, alleging his group used false identification to conduct “large-scale illegal taping,” which the lawsuit says cost the organization millions of dollars and endangered the lives of its employees.

“These anti-abortion extremists spent three years creating a fake company, creating fake identities, lying, and breaking the law,” Eric Ferrero, Planned Parenthood’s vice president of communications, told the Daily Dot. “When they couldn’t find any improper or illegal activity, they made it up.”

“These people broke the law to spread malicious lies about Planned Parenthood in order to advance their extreme anti-abortion political agenda,” Ferrero continued. “As the dust settles and the truth comes out, it’s become totally clear that the only people who engaged in wrongdoing are the criminals behind this fraud, and we’re glad they’re being held accountable.”

Ilyse Hogue, president of NARAL Pro-Choice America, the nation’s oldest abortion advocacy group, called the attacks by David Daleiden and his allies “baseless,” and she said they were designed to “ensure that women have nowhere to turn for a safe and legal abortion.”

“The grand jury today arrived at a conclusion we’ve understood for months,” Hogue told the Daily Dot in a statement. She echoed Ferrero’s characterization of the videos’ creators as “anti-choice extremists” and said their goal was to “spread wild misconceptions about abortion providers, jeopardizing the health care of millions of low-income Americans.”

Investigations have cleared Planned Parenthood of any wrongdoing in eleven other states beyond Texas, including Kansas, Florida, Ohio, Washington, Pennsylvania, Georgia, Indiana, Massachusetts, Michigan, Missouri, and South Dakota. Officials in eight other states have publicly declined to investigate the allegations raised by Daleiden’s group, citing a lack of evidence.

Individual sentences were edited to omit certain words, the investigators found, and words were reportedly added to the videos out of context.

A transcript of one undercover video published by Daleiden—and allegedly filmed in Texas—contained “more than 4,000 words of dialog” that does not appear in the video, Fusion GPS found, whereas an additional 4,000 words spoken in the video were omitted from the transcript.

Photo via Charlotte Cooper/Flickr (CC BY 2.0)