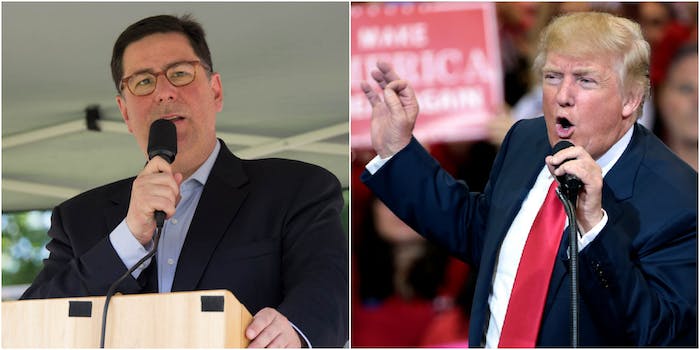 President Donald Trump faced swift condemnation for his decision to pull the United States out of the Paris Climate Accord, a landmark international pact to address climate change. But no criticism may hit harder than that of Pittsburgh Mayor Bill Peduto.

During Trump’s White House speech announcing his decision to withdraw from the Paris Climate Accord, the president won over supporters with the line, “I was elected to represent the citizens of Pittsburgh, not Paris.”

The line was quickly shared by supporters and White House staffers alike, a moment that distilled Trump’s “America first” argument for exiting the Paris Agreement, which he argued would hurt the U.S. economy and “the forgotten men and women of America” specifically.

Peduto, however, was quick to point out that Trump lost the vote in Pittsburgh by a large margin.

Fact: Hillary Clinton received 80% of the vote in Pittsburgh. Pittsburgh stands with the world & will follow Paris Agreement @HillaryClinton https://t.co/cibJyT7MAK

Trump won Pennsylvania by just over 44,000 votes. Allegheny County, where Pittsburgh is located, voted for Clinton 55.84 percent to 39.6 percent, according to the Pittsburgh Post-Gazette.

Peduto reiterated his criticism of Trump’s decision, writing that the people of Pittsburgh “will follow the guidelines of the Paris Agreement for our people, our economy, and our future.”

As the Mayor of Pittsburgh, I can assure you that we will follow the guidelines of the Paris Agreement for our people, our economy & future. https://t.co/3znXGTcd8C

The Paris Climate Accord (aka Paris Agreement or Paris Accord), negotiated under former President Barack Obama, aimed to greatly reduce greenhouse gas emissions, create an international fund for dealing with the effects of climate change, and keep the temperature of Earth to a sustainable level. The U.S. had agreed to reduce its emissions to 26 to 28 percent of 2005 levels.

Peduto was far from the only politician to quickly denounce Trump’s decision to exit the Paris Agreement. Former Vice President Al Gore, a pivotal proponent of environmental issues, lamented the president’s decision as “reckless and indefensible.”

“Removing the United States from the Paris Agreement is a reckless and indefensible action. It undermines America’s standing in the world and threatens to damage humanity’s ability to solve the climate crisis in time,” Gore said in a statement. “But make no mistake: If President Trump won’t lead, the American people will.”

This sentiment of self-determination echoed across the U.S., with mayors, governors, and corporations committing themselves to reversing the effects of climate change.

Despite lacking a strong partner at the federal level, it is incumbent upon us to continue this incredibly important work. #ParisAgreement https://t.co/rYUdcBkLQ3

On behalf of New York City, I will commit to honor the goals of the Paris agreement with an Executive Order in the coming days.

1/4 Amazon continues to support the Paris climate agreement and action on climate change.

New York is committed to meeting the standards set forth in the Paris Accord regardless of Washington’s irresponsible actions. #ActOnClimate

Obama also weighed in, releasing a statement defending the Paris Climate Accord as precisely the opposite of what Trump claims it to be: Good for the U.S. economy, good for Americans, and good for the planet.

“The nations that remain in the Paris Agreement will be the nations that reap the benefits in jobs and industries created,” Obama said in a statement. “I believe the United States of America should be at the front of the pack. But even in the absence of American leadership; even as this Administration joins a small handful of nations that reject the future; I’m confident that our states, cities, and businesses will step up and do even more to lead the way, and help protect for future generations the one planet we’ve got.”

Trump said during his speech on Thursday that his administration would be willing to re-enter the Paris Agreement or a new accord provided the U.S. receives more favorable terms. Regardless, exiting the climate pact will not be a swift process.

In fact, full withdrawal could take as long as four years, which means the U.S. would not actually exit the agreement until Nov. 4, 2020—one day after the 2020 presidential election. As a result, Trump may have inadvertently made climate change one of the biggest issues in America today.