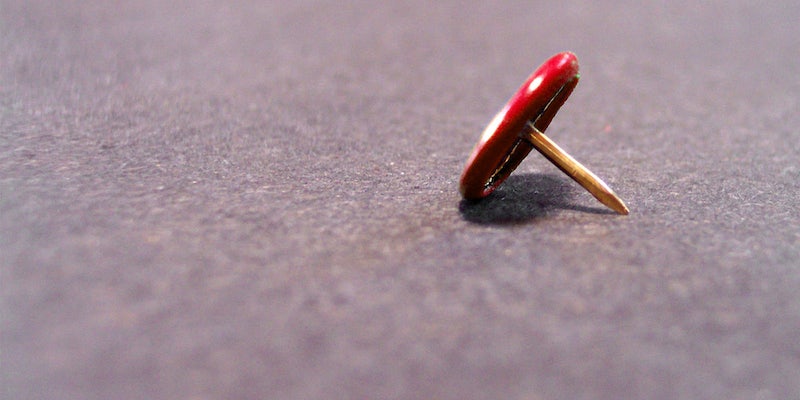 Looking for a way to grow your audience? We asked the experts.

Pinterest CEO Ben Silbermann wants you to know that the site is not a social network. It’s not about what you project to others; it’s about pinning personal ideas and inspiration for future use.  “My dream would be that Pinterest becomes this indispensable tool where people plan their future,” he told USA Today.

With the long-awaited introduction of buyable pins, Silbermann’s vision for the company as an interactive catalog is abundantly clear. Even still, Pinterest remains a viable traffic referral for many publishers. Jonah Peretti claimed during his SXSW keynote that BuzzFeed generates 60 million monthly visitors from Pinterest, and more than 6.4 billion impressions. According to Shareaholic, at the end of 2014, Pinterest drove 5 percent of website traffic referrals, making it second only to Facebook. 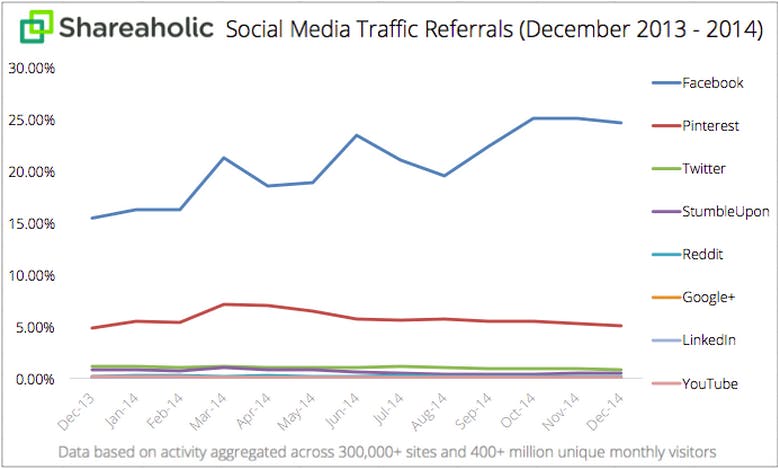 The questions is: How?

Over the course of the last two months, I studied the ins and outs of three Pinterest giants—Mashable, BuzzFeed, and Refinery29— looking at everything from the picture sizes to average word counts. I also read just about every report on Pinterest I could find, and spoke to key players at Mashable and BuzzFeed. After all of this I came up with seven ways for publishers to use Pinterest to connect with their audience.

To succeed on Pinterest, you first need to be aware of what pinners are looking for.

The top categories people pin on Pinterest are food and drink, DIY and crafts, and home decor, according to market research company RJMetrics. 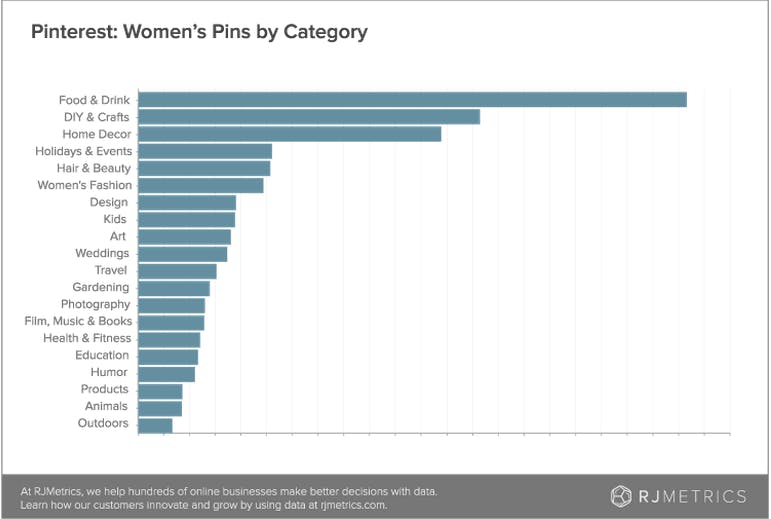 Another way to find popular Pinterest topics is to follow companies that are relevant to your content and observe which boards are the most popular. Identify the most successful topics of your contemporaries, take what works for them, and throw out the rest.

In 2013, the data scientists at Curalate studied over half a million images to find what makes the perfect Pinterest photo. The study concluded that the most popular Pinterest photos have multiple colors, show no human faces, use little background, and are halfway in between black and white and full color intensity.

Pinterest photos that were red, orange, and brown were repinned almost twice as much as blue images.

According to Wired, this is the perfect Pinterest photo: 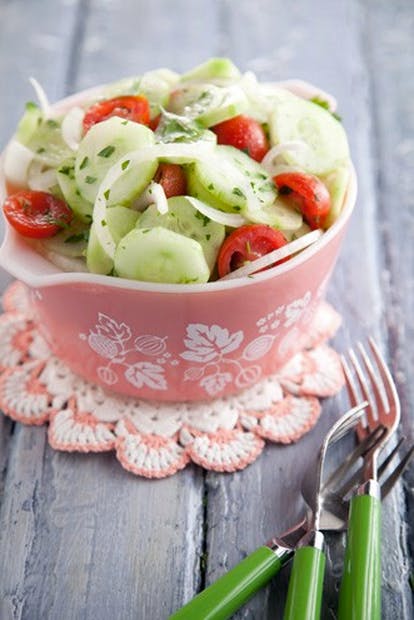 As you can see this photo has no human face, the background takes up only a small amount of the picture, and the colors and brightness are moderate. All of those qualities will help make it stand out.

You may be asking yourself, ‘what if an article does not have pictures with these qualities?’ For Mashable, the answer is custom artwork. According to Mashable’s social projects manager, Ryan Lytle,

“[Mashable creates] a decent amount of custom artwork for Pinterest—basically images we create and add to our stories for the sole purpose of sharing to the Pinterest platform.”

So if you have the time, adding pinterest friendly photos is well worth the effort.

For being such a visually orientated website, descriptions are surprisingly important on Pinterest. According to Dan Zarrella, a difference of a hundred characters can mean a giant gap in repins. 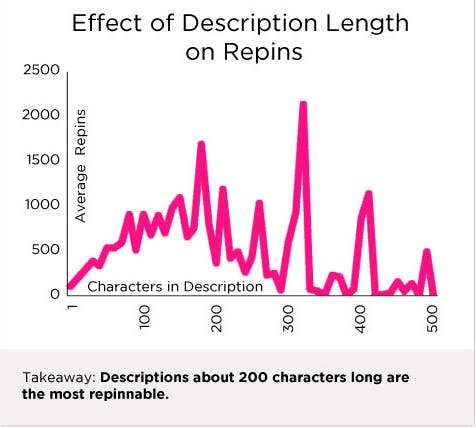 When writing descriptions try to be succinct. Nobody wants to read a paragraph when scrolling through dozens of breathtaking photos, but people also want to have an idea of what they’re looking at.

Using keywords is also important on Pinterest. As Lytle puts it,

“At Mashable, we typically keep our messages in each of our pins fairly short, but pack them full of descriptive words. The search functionality on Pinterest is such a key part of the platform, and if you are able to include strong keywords in your messages, you have greater opportunities to reach a Pinterest audience far beyond your own follower base.” 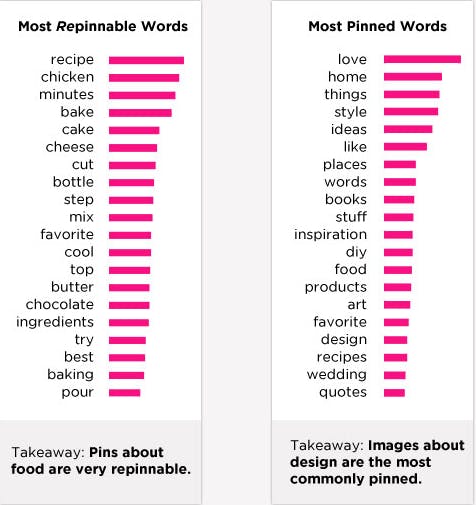 Between Mashable, BuzzFeed and Refinery 29 the average pin was 11.3 words. Here’s one of Mashable’s most popular pins. Note the brevity of the headline: 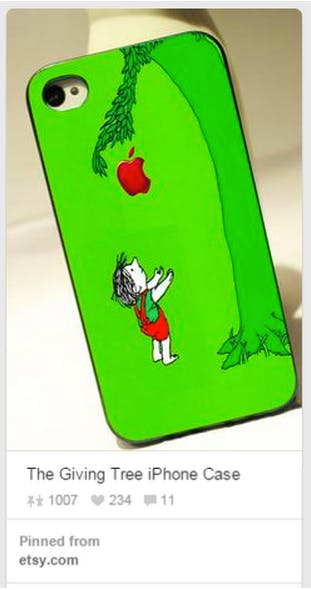 4) Collaborate on a shared board

Pinterest gives users the option to share boards with other pinners. One quick way to gain an audience is to find someone with a significant following to collaborate with.

Shared boards are mutually beneficial for collaborators because the board instantly gains every “all board” follower from both your account and those you’re collaborating with, assuring greater circulation of your content.

“It’s a two birds, one stone tactic,” noted Peggy Wang, BuzzFeed’s founding editor. “We only have to pin once, but it’ll show up twice in two different feeds.”

You can reach out to pinners by commenting on their pins and tagging the user with an @ sign. Just don’t spam. When reaching out to users make it clear why you would like to collaborate, and let them know what you bring to the table.

Based on the averages of BuzzFeed, Refinery 29, and Mashable, you should pin 38 pins a day. While I know this is an unrealistic goal for those new to the platform, it drives home the point that consistency is key.

Because of Pinterest’s algorithm, the time of day you post doesn’t matter as much you’d expect; posts don’t appear linearly the way they do on Twitter. Pinterest mixes it up, ensuring that users see a variety of content. That means that you should feel free to post at will.

On listicles, many media companies will post the same article multiple times back to back, with separate photos; each one increases the odds that one will catch a pinner’s eye. 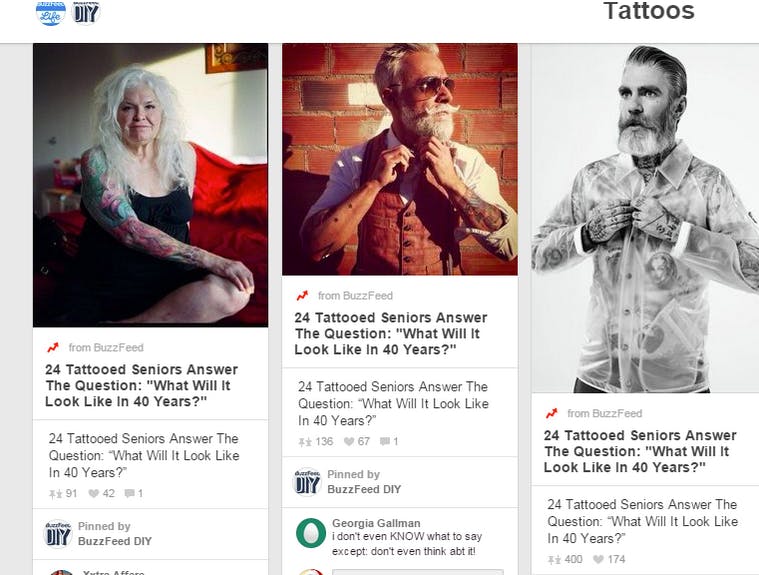 You can keep your daily posts high by repinning quality content. BuzzFeed, Mashable, and Refinery29 all repin content from outside of their website. You can also post your links with multiple photos using different angles and sizes.

No one enjoys reading an RSS feed—not even on Pinterest.

While some companies can get away with generic descriptions, the independent pinners who have succeeded show personality. 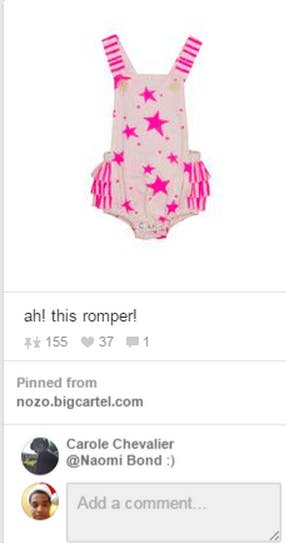 You can be personable on Pinterest without using language that will tarnish your image. Simple statements of enthusiasm like ‘YES!’ and ‘can’t wait to cook this!’ go a long way. Wang commented,

“The captions are what make an image transcend from just another pretty photo into something that takes on human-like qualities.”

If you let people know that a real person is behind the boards, they are more likely to take interest in what is on them.

Pinterest can be difficult, but once you figure out how it works it’s fun. Lytle said it best when he commented,

“There are amazing conversations, projects and innovations happening on Pinterest, and we’d be missing out on a very active, creative experience if we weren’t a part of it. Pinterest gives Mashable an opportunity to really think outside the box about the kinds of images we use in our stories and also on the platform. It’s been a great, experimental experience for us.”

Although it can be frustrating to figure out how to market your brand on Pinterest, it’s well worth the struggle. Pinterest gives your brand the opportunity to shine in one of the internet’s least restrictive, most creative, and bussiest spaces. So stick with it and stay creative.

Alexander Mesadieu is studying social media and journalism at Southern Oregon University. You can reach him with comments via email.