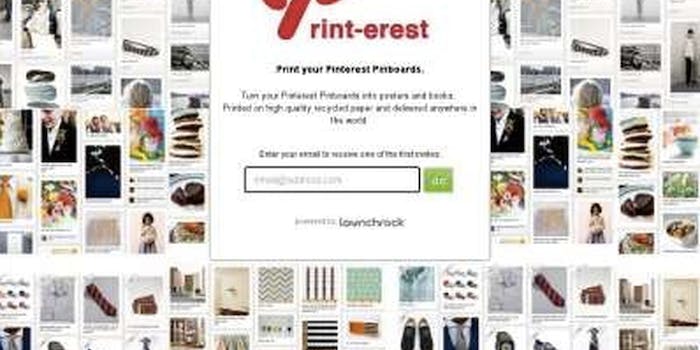 Pinterest wants nothing to do with Print-erest, a barely beta service that wants to print your pinboards.

No matter what you want to get out of Pinterest, there’s a third-party service for it.

Want to measure your Pinterest Clout? Try Pinreach (formerly known as PinClout.) Want to read Pinterest in magazine form? Try Pinned Monthly. Would you like a poster of your pinboard? There’s Print-erest for that.

Now Pinterest is finally catching wind of these services. And it’s taken this opportunity to denounce one of them: Print-erest. Despite what some have thought, Pinterest said that it is not affiliated with this third-party service.

Pinterest has a reputation of being the silent type. So silent, in fact, that the company will not deign to even respond to a plea from Microsoft. While the company addressed copyright concerns last week, it seemed to have done little to quell the panic of users.

It’s no wonder that Facebook users have capitulated on this rare sign of life, bombarding the status update with confused questions and demands about the Terms of Service in general.

“Ok so it’s illegal to pin? Or repin? Or is it just illegal to print the pins?” wrote Shandel Blondeaux Dodgen.

“I also heard the individual user can get sued if they pin anything that they dont have permission on. is this true?” added Terry Scrivener.

Pinterest has not responded to any of these concerns.

However, Print-erest has replied to Pinterest’s denouncement on its own Facebook page. It says the service will actually benefit the artists whose work users are pinning and printing:

“Hey guys, the site is in development and awaiting the official Pinterest API. Nothing will be printed with out consultation with the artists. If you think about it – if you give permission for your images to be printed you will make money. That is the gist of the site. We love the internet and love your work and actually want you to make money out of it. Cheers, The Printers.”

It’s a nice thought, but how will this barely beta launch proceed after a public nod of disapproval from Pinterest?

We’ll see when the ink dries.