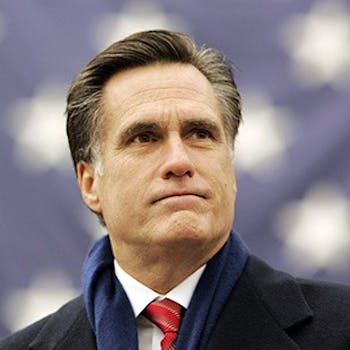 Sadly, no. But he should be.

Twitter CEO Dick Costolo called the upcoming presidential race the Twitter election. But we think in 2012, you have to pin it to win it.

In a new form of political satire, some clever meme-hacker created what appears to be an official Pinterest board for GOP front-runner Mitt Romney—at least on first glance.

Why the parody is so sharp: To some, Mitt Romney signifies the one percent, an affluent former executive turned politician accustomed to the finer things in life. (He cleared $20 million in 2010 with a rate of taxation at only 13.9 percent.) In other words, the Republican presidential candidate is an ideal user of Pinterest.

Just take this caption on a photo of a “starter yacht,” filed under “great deals”:

“Great for someone right out of college. And they reduced the price, so you should really jump on this.”

Of course, Romney isn’t the only GOP candidate making a run—or getting run down—on Pinterest.

Coming off of a recent heartland hat trick in the primaries, Rick Santorum has seen his impeccable sweater-vest collection take off in the community (and inspire a Twitter account, @FearRicksVest).

An account in the name of his niece, Caroline Santorum, fulfills every Pinterest stereotype, pinning images of weddings, divas, and the “preppy life.”

But the Romney account, which has garnered 45 followers to date, is far more entertaining. Under favorite things, the parodist posted a photo of Gläce “luxury ice” used to soothe his injured ankle, pictures of money, and boasts about a Pellegrino bath.

“It’s so hard to find good elephant tusk ivory toothpicks nowadays,” the Romney account wrote about walrus-ivory toothpicks from Etsy. “But these ones made of walrus ivory are okay. Your party guests hopefully won’t notice the difference.”