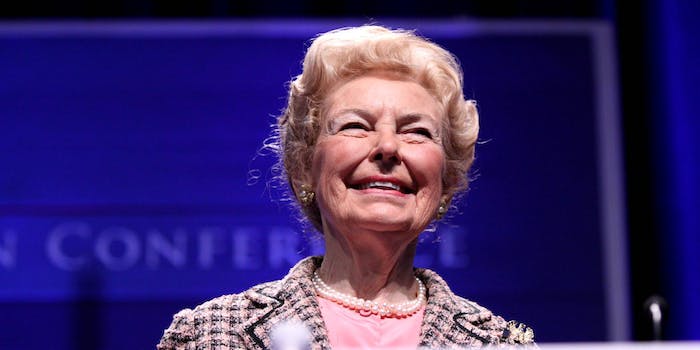 ‘First Lady of the Conservative Movement’ Phyllis Schlafly dead at 92

The internet has drawn deep political lines on her legacy.

Phyllis Schlafly, dubbed the “First Lady of the Conservative Movement,” died Monday at age 92 after a long battle with cancer.

The Eagle Forum, the conservative, pro-family organization that Schlafly founded in 1972, praised her decades of public service in a statement posted to its website.

Phyllis Schlafly spent an astounding 70 years in public service of her fellow Americans. Her focus from her earliest days until her final ones was protecting the family, which she understood as the building block of life. She recognized America as the greatest political embodiment of those values. From military superiority and defense to immigration and trade; from unborn life to the nuclear family and parenthood, Phyllis Schlafly was a courageous and articulate voice for common sense and traditional values.

She was an outspoken opponent of the Equal Rights Amendment (ERA), which would eliminate gender-based discrimination, and was the leader of the STOP ERA campaign. Schlafly opposed abortion, gay marriage, and believed that women should stay home to take care of the house and children; ironically, she had an active political career and had bachelor’s, master’s, and law degrees and hired a housekeeper.

Schlafly’s contributions to the conservative movement are in part responsible to its rise in U.S. politics and evangelicalism over the past few decades, and she was remembered by conservatives online.

So saddened to hear of the passing of Phyllis Schlafly. I'm blessed to have known her and I'll never forget her work as a conservative icon.

Saddened by the loss of Phyllis Schlafly. She was a dear friend and great leader for conservatism. She will be missed.

Phyllis Schlafly was a strong and courageous voice for family values. She will be missed. https://t.co/Ss5a58QD6W

Thank you, Phyllis Schlafly, for your grace, strength, courage and impact. Always classy. Never shirked from a fight. God bless you.

“I was able to speak with her by phone only a few weeks ago, and she sounded as resilient as ever,” Donald Trump said in a statement. “Our deepest prayers go out to her family and all her loved ones.”

Schlafly endorsed Trump for president earlier this year, and Trump also honored her by praising her for that endorsement in a tweet this morning.

The truly great Phyllis Schlafly, who honored me with her strong endorsement for president, has passed away at 92. She was very special!

Others were quick to point out that belittling the dead isn’t really taking the high road.

Actually people being rude about Phyllis Schlafly after her death is the same as what she did to make things worse for people all her life.

Funeral plans for Schlafly are pending, according to the Eagle Forum.