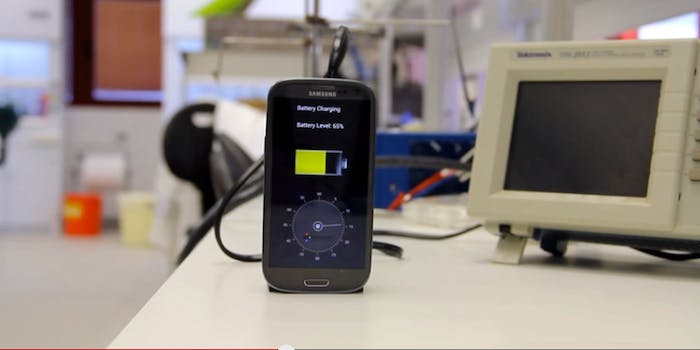 This crazy nanotechnology can charge your phone in just 30 seconds

Watch this smartphone go from dying to fully charged in half a minute.

People disagree on almost everything, but find me someone who genuinely likes waiting for her smartphone to charge and I’ll show you an abominable masochist thoroughly out of step with humanity. The process of plugging a smartphone into a wall or device and letting it sit until the battery regains power is a necessary nuisance, like going to the dentist, or watching commercials at the beginning of YouTube videos.

So if this prototype from StoreDot can be commercially replicated, the Israeli nanotechnology startup has what will be an absolutely killer product on its hands: a phone charger made from biological semiconductors that can take a phone from dying to fully charged in 30 seconds.

The StoreDot team is demonstrating their prototype at Microsoft’s Think Next conference in Tel Aviv today. The prototype they built works for the Galaxy S4, and according to TechCrunch, Samsung is rumored to be one of the startup’s investors.

StoreDot uses teensy nano crystals it calls “nano dots” as the cornerstone of its tech, which haven’t been used before. It is currently focused on developing these speedy phone chargers and better smartphone displays using the nano crystals.The technology has impressed fans with deep pockets: StoreDot has raised $6.25 million and is aiming for $20 million.

Cofounder and CEO Dr. Doron Myersdorf believes the team can have a functional prototype within a year, and a commercial product ready in around three years. So this super-fast charger could be available in 2016 or 2017, and is expected to retail for twice the cost of a normal phone charger.

Who wouldn’t pay extra for such a fast charger? If StoreDot can make this happen, it’ll be huge. But the company isn’t ready for a commercial launch. The prototype now is too big, and it doesn’t fully charge the phone. And Myersdorf is skeptical that the rest of the smartphone ecosystem is primed for his biologically advanced technology.

“The only disadvantage is that the industry is not ready for it. The ecosystem is not ready,” Myersdorf told TechCrunch. ”This is a new type of material, with new physics, new chemistry, that is actually coming from nature,” he said.